Meet the market on non-mulesed wool or else – Small 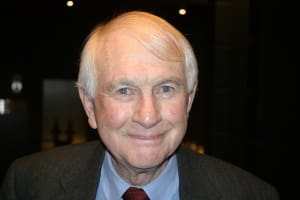 AUSTRALIAN wool growers who believe their customers should pay a bigger premium for non-mulesed wool were naïve, according to Victorian-based grower and Merino garment maker Peter Small.

The chairman of the merino clothing specialist company Toorallie Australia has just returned from China and said growers could not expect non-mulesed wool premiums of more than 40-50c/kg without risking substitution by synthetics.

“They will go to another fibre because it is just too difficult to handle.

”It’s alright while there is a market shortage of wool, but once supply builds up, we will rue the day we continued to mules and defy what the market is asking of us.”

Mr Small said the owners of the Chinese mill his wool was processed in said they needed more non-mulesed wool for orders. The Toorallie wool Mr Small selects from the Pooginook flocks is processed by Chinese top maker New Chuwa and spinner Xinao.

“Pain relief is never mentioned because it is too complicated a story – they want a simple story to tell their customers.

“Their customers are in the fashion industry producing garments for the Northern Hemisphere and they are desperate for non-mulesed wool,” he said.

“I receive that message every time I go there.

“We are not satisfying what the market wants,” Mr Small said.

Mr Small said because the textile industry is so competitive, fashion conscious and price-point sensitive, the pressure on it for cheaper product from consumers, fashion designers and retailers is “unbelievable”.

“If they can’t get non-mulesed wool, they are not going to pay more money for it, because of the price pressure.”

Mr Small said Australia risked losing markets or wool being substituted by synthetics, if it did not supply wool to customer’s specifications, including non-mulesed wool when it was required.

Mr Small said all Toorallie customers want to know is that the animal is ethically cared for.

“We are not in the European, American or Japanese markets, we are just purely in Australia and Australians understand the situation a lot better.”

Mr Small has just returned from China with Pooginook stud classer David Taylor, to see the current batch of Pooginook wool selected for Toorallie’s winter 2019 range, processed into wool tops. The trip prompted him to write the following essay.

Mulesing; Have we convinced ourselves of our own rhetoric to the wool industries detriment?

It is five years since I first went to China and I heard the plea of wool processors for Australia to do something to increase the availability wool from non-mulsed sheep. I responded with the well-worn rhetoric as to why we had to mules. You all know the lines:

“Mulesing is the lesser of two evils; a death from fly strike is much worse.”

Last week I was again in China, answering the same question, and as I mouthed the same answer as five years ago and many times in the interim, I thought to myself, ‘wait a minute, what I am mouthing is really just blind rhetoric’.

The blow fly that causes havoc with flystrike with sheep is Lucilia cuprina. It arrived in Australia sometime in the early 1900’s. JWH Mules, a wool grower in South Australia had a ewe that repeatedly got fly struck. In desperation, he surgically removed the wrinkle from around the ewe’s tail and solved the problem.

In 1931, Mules had a letter published in the Adelaide Advertiser, where he explained his new solution to flystrike. The letter received a lot of opposition. However, in 1940 the Joint Blow Fly Committee recognised “that mulesing provided a good degree of fly protection”. The current procedure was first adopted by the industry in 1947.

Interestingly, at about the same time as JWH Mules was experimenting with his repeat offender ewe, a young scientist HB Carter received an assignment from Australian Estates and Mortgage Company as a research officer. His assignment as Dr Carter described it to me when I sat in his garden at his home near Bristol on one balmy English summer’s day in 1994 was to find out why some of the sheep on the Australian Estates properties were prone to flystrike, and others seemed to be flystrike resistant.

This enquiry led Carter to study the histology of the sheep’s skin, beginning the unlocking of the profound knowledge that the ratio of swint and wax glands and primary and secondary fibres is the key to fleeces either attracting blowfly strike or not. This original work of Carter has been pursued by others and most recently by Dr Jim Watts working in the field with Merino stud breeders since the early 1990s.

Although the literature suggests that mulesing was first adopted by the industry in 1947, the first I heard of it was when as a young 26 year-old farmer in 1967 my father invited the Victorian Department of Agriculture to conduct a mulesing demonstration day on our property, Tottington, near St Arnaud. About 20 turned up and I remember one farmer Colin Hosken a fine wool producer and our neighbour, exclaimed after the first incision, “bloody in humane” and left very angry. Colin never ever mulsed but we did from that day onwards.

When discussing this recently with David Taylor the stud classer at Pooginook, David told me that when he was an overseer on Uardry in the late 1960’s he convinced Mr Jameson, the manager, to let him mules one mob at lamb marking. The results were so impressive that Uardry then adopted mulesing across the whole stud.

Undoubtedly in the 1960’s mulesing was a wonderful innovation, but when I think back, everything has changed profoundly since then. At Tottington in the 1960’s we would spend weeks prior to shearing digging dags off shitty sheep and cart loads of dags to the Stawell woollen mills. Today on our property Wilderness near Coleraine we only have a few packs of dags. Most sheep today just don’t have dags the way they used to. So why the change?

In the 1960’s we only had a drench called BAN (Blue stone, Arsenic and Nicotine), pretty useless although the blue stone (copper sulphate) may have assisted with copper deficiency. Worms were an enormous problem until the first of the modern drenches, thiabenzole arrived on the scene. The only fly strike control was jetting with dieldren, (a pretty dangerous chemical) and later diazinon, safer but not by much!

Today the sheep have changed profoundly, we have a selection of efficient drenches, we know how to control worms, and we understand the importance of good animal nutrition and the importance of a balanced source of minerals, essential for good animal health. On most well-run properties sheep are much healthier and productive and consequently have firm faeces throughout the year.

But it is the change in the sheep themselves that is profound. For evidence of this you need only walk along any broker’s sale room and inspect the wool in the boxes. Nearly all the suinty, cross fibre wools that attract flystrike have gone. The wools are longer in fibre length, bright and crimpy and with well-aligned fibres and finer than the clip of the 1960’s.

This is a mere mirror, as you would expect, of the rams that are presented for sale at any ram sale. Sheep that produce long well-aligned deep crimping wools only come from plainer body sheep.

So in the last 50 years the sheep have changed, the wool has changed and our animal husbandry has changed. Yet we continue to convince ourselves that we must use the flystrike method developed at a time of desperation.

Many SRS breeders have become alert to this and successfully eliminated mulesing. Whilst there are many tight skin wrinkly sheep still in Australia and they will continue to need mulesing, I would like to suggest to all my fellow wool growers who mules, to do the opposite to what David Taylor did at Uardry in the late 1960’s. Why not try one mob this year and don’t mules? Care must be taken with urine stain around the tail, but new flystrike prevention chemicals can be utilized.

It is important for Australian wool growers to find a way to help supply our markets with the product they require and thereby enjoy the premium which is already 30-plus cents per kilogram and if the current market retracts, may become much higher.

Whilst those of us who perform the mules operation have probably become desensitised with what we are inflicting on our lambs, most of our customers, like our neighbour Colin Hosken back in 1967 are appalled.

Failure to supply the market with what it requires will cause substitution to other fibres and may compound our woes down the track with shortage of supply and the consequential impact on price.