SHEEP Producers Australia’s newest board candidate Robert Herrmann has stepped up to take a new role in the industry he grew up in, loves and works for.

Mr Herrmann and re-standing SPA director Bindi Murray have been announced as the approved candidates for the peak body’s board, to be ratified at its 2020 virtual annual general meeting in November.

Robert Herrmann has been working in the industry for about 43 years, from working on the family farm at Byaduk near Hamilton in south-west Victoria, to supplementing that income with shearing, wool and sheep classing, and then joining Elders as district wool manager in Hamilton, the wool capital of the world.

One claim to fame is that the recently demolished, but once iconic, Hamilton Wool Bales complex, had his classer’s stencil emblazoned on one of its exterior walls.

For the past 24 years, Mr Herrmann has been managing director of Mecardo, an independent market analysis business and a respected forum analysing Australian agricultural commodity dynamics, including sheep meat and wool.

Mr Herrmann said it was one thing to be disappointed that the Australian sheep industry is in the state it is in – with a historically small flock and low wool prices – but another to do something about it.

“You can be wringing your hands and saying it’s terrible and something should be done, or you can try to do it.

“The bottomline is that the Merino sheep was designed for the Australian environment and conditions, and that still stands,” he said.

“So it is an absolute necessity to have a vibrant sheep industry in Australia, because it is just so suited to a lot of the production systems in the country and it has stood us in good stead.

“So to think that the challenges of labour and markets are actually causing the demise, that says that you need to deal with those challenges.”

Mr Herrmann said the sheep needs to be able to compete for acres against other land uses.

He is not convinced the solution to this is complex, and not as simple as saying the problem is that agriculture’s youth just want to drive tractors and go cropping.

“I don’t buy that, I think what they are looking for is a future that has real relevance to this time, and that means it is innovative, things are measureable and outcomes are predictable – which is what happens in cropping.

“They need rain, but they know if they do this they get that,” he said.

“The challenge for the sheep industry is to say that we can provide that sort of future for young farmers who have country, and a lot of them have country for which the best animal to be on it is a sheep.”

He believes his background of practical sheep and wool industry involvement, analysis and commentary will be essential and valuable in his new SPA role. 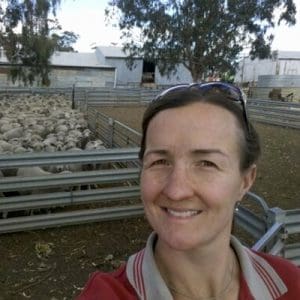 Ms Murray is a current SPA board member who retires by rotation and has re-nominated for a second term. She is a commercial sheep producer at Woodanilling in Western Australia, joining 9000 ewes to Merino and terminal sires. SPA said Ms Murray’s belief that science is at the heart of agriculture led her to complete a Bachelor of Animal Science, where she focused her Honours thesis on the link between high wool production and meat quality. Bindi career has focused on technical, strategic, governance and advocacy roles in business, industry, government, and community. She is a graduate of the AICD Company Directors Course and the Rabobank executive development program. Bindi has been a strong contributor to the SPA board.

Robert Herrmann is a former shearer, a Victorian farmer and part-time sheep classer, but is better known as managing director of Mecardo, which he established in 1996. SPA said Mr Herrmann brings expertise in risk management, strategic thinking, strong communication skills, an extensive industry network and a unique insight into the sheep supply chain. He has an excellent understanding of the opportunities and challenges facing the sheep industry and his experience, insight and enthusiasm for the sheep industry would be welcomed by the board, SPA said.

“Both candidates will be nominated at the SPA Annual General Meeting which will be held virtually on the 2 November for our members to consider.”

“The role of the SPA board is pivotal in assisting SPA to enhance the productivity, profitability and sustainability of the Australian sheep and lamb industry and I look forward to working with the new board members in progressing our goals,” Mr Mirams said.