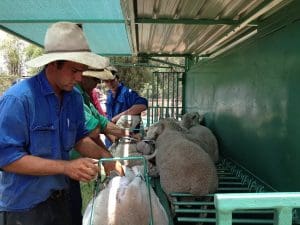 While they may be known as less labour intensive, handling has started to become a challenge with fast weight gains and the animals’ ability to jump.

But David Paterson from Kaloola Station near Longreach said the main handling challenges came at lamb marking time due to the animals’ fast growth rate.

“We had lambs on the ground in a six-week joining period and the early lambs that were seven or eight weeks old were big and strong,” Mr Paterson said.

“With their weight gain so much faster than a Merino, we realised we needed to purchase better handling equipment to make life easier.”

The Paterson family moved into meat sheep after years of drought, which had led to the destocking of their Merino flock.

Like many producers in western Queensland, they built an exclusion fence around the property to control wild dogs and better handle sheep. Since 2016, they have been crossing Dorper ewes with Australian White rams.

With the lamb marking and drenching issues arising, they decided to purchase a hydraulic bulk handling machine, which immobilises the sheep, eliminating the need to lift them. The machine also has lamb marking cradles on the side.

“We are sometimes lamb marking four times a year, on controlled joining programs and lamb marking is heavy going – whether you have the right gear or not.”

Several brands have sheep lifting equipment on offer, either handling one animal at a time or multiple animals in one lift, and the handlers are also popular in the goat industry. But Lionel Smith from Buckey’s Creek Station, near Augathella, said he would like to see more producers coming together for meat sheep-specific handling sessions. Mr Smith said most of his research had been through social media and word of mouth.

“It would be good to bring all the handlers together and see how they work,” Mr Smith said.

“Everyone is going to be different in what suits their operation, but it would be good to talk about this with the equipment in front of you.”

While he has been using a traditional race to drench sheep, he is keen to upgrade the equipment.

“It is pretty easy when you are in your 20s, but when you move into your 40s it is pretty hard to handle them.

“They’re a really strong animal, in the way they are built.”

“We keep them moving a lot, which reduces the risk of worms, and stops us having to drench as much.”