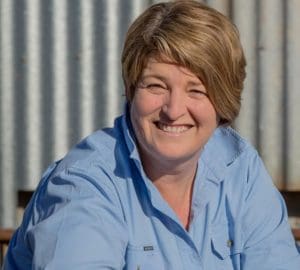 SOUTH Australian sheep producer Jane Kellock is set to continue as the sheep meat representative on the Meat & Livestock Australia Board Selection Committee.

MLA has announced the nominees to fill three producer representative positions on the MLA Board Selection Committee at this year’s Annual General Meeting to be held as part of Red Meat 2017 in November in Alice Springs.

Ms Kellock is the sole sheep meat nominee for the committee position she has filled for the past three years. MLA said Ms Kellock has had a lifetime involvement with the sheep industry and is currently a director of Kellock Farming. She has been a part of the South Australian Blueprint group and has been selected as the Regional Chair of the South Australian Committee of SAMRC.

Ms Kellock said she is very passionate about the sheep industry and wants to ensure that industry has the absolute best people for the role on the Board. She believes it is essential that the MLA board had people with integrity, leaders in their field and passion for the industry to grow.

The role of the selection committee is to call for applications, review, interview and then report to members on the suitability of candidates for election to the MLA Board.

The board selection committee is currently made up of two non-voting MLA directors, three representatives nominated by producer peak councils and four producer members who have been directly elected by MLA members – one sheep meat, one grain-fed cattle and two grass-fed cattle representatives.

This year, MLA members have the opportunity to directly elect three producer representatives to the MLA Board Selection Committee for a three-year term, from nominees from three producer categories:

The nominees to fill the BSC positions include:

One grassfed cattle representative from:

MLA members not voting in person at MLA’s AGM are reminded to return their Voting entitlement and proxy form so MLA receives it no later than 3.30pm (Northern Territory time) on Monday 20 November 2017 to ensure they are able to exercise their full voting entitlement.