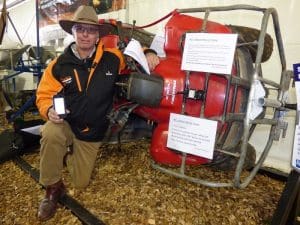 CHATSWORTH Angus and sheep breeder Mark Gubbins is hoping some good will come out of tragedy with his tracker and roll-over alert system for four-wheel motorbikes.

Three years ago he lost a nephew in a four-wheel motorbike accident, prompting him to think about what could have been done.

“What it does is, if we invert this bike it text message the bike’s position and the time of the roll-over within one minutes to as many phones as you want to pre-program,” he said.

“That could be to your fellow workers, your boss, your wife, your children or your neighbours.”

Mr Gubbins said with the system on a vehicle if there was a roll-over accident, people had the ability to find and render assistance to an injured rider or driver.

“It also pin-pricks it on a map (on the Austracker website).”

The invention used readily available parts, including a GPS tracker and a data link joined to a mercury switch, which could send a signal through the GSM network or via satellite in remote areas.

“So it can be used Australia-wide, it is not just through the phone network.”

The alert system will send a signal when the bike has gone over or is past the point of no return and that will then send a text message through a prescription-based server worth about $320 a year, which is “nothing” in the context of saving a life, Mr Gubbins said.

Parts cost about $700, but Mr Gubbins is seeking support from the Victorian Farmers Federation and Worksafe to minimise the cost.

“I’m hoping with a bit of support we can get a bit of volume in it and get the cost down.

Mr Gubbins said riders could still hurt themselves on a motorbike with roll-over protection.

“Nothing is perfect, but both can help.”