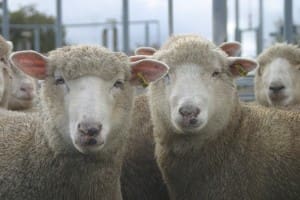 SHEEP and goat producers have been told to be more vigilant in livestock transaction paperwork and tagging as industry bodies today sent a public warning to Victoria’s Agriculture Minister Jaala Pulford on making electronic tags mandatory.

Last month Ms Pulford said mandatory electronic tagging of sheep and goats in Victoria was “probably an inevitable move” and the Department of Economic Development, Jobs, Transport and Resouces is evaluating its latest electronic tag tenders that hope to make the EID tags cheaper for producers. On August 28, Victorian chief veterinary officer Dr Charles Milnes said the state government would be making a statement on electronic tagging of sheep “shortly”. However, this month the Victorian Farmers Federation was unable to a “clear answer” on the state government’s agenda for wider use of electronic sheep tags in the state.

The producer and agent bodies said mandatory implementation of electronic radio frequency identification (eRFID) is currently being considered by the Victorian government and they believed the eRFID tag tenders were part of a possible compulsory tagging system for sheep and goats in Victoria.

“While we support the right of individual producers to use eRFID, the enormous costs and resources involved with implementing mandatory eRFID across the supply chain would far outweigh any benefits for industry.

“The current system is simple, cost-effective, and well-accepted by industry,” he said.

Mr Murray said it was critical that producers realised that a National Vendor Declaration was a food safety declaration, to meet consumer demands for the highest possible standards. Producers who incorrectly tag sheep or fill out NVDs were giving the Victorian government justification for mandatory tagging, he said.

WoolProducers Australia president Richard Halliday said Australian sheep and goat producers could meet any traceability requirements if they lifted their compliance in National Vendor Declaration recording and tagging. Producers needed to be more vigilant to achieve the required compliance, he said.

“If we want to keep the system we have, as growers, we have to do it properly.”

Woolproducers Australia believed that imposing the “expense and complication” of a mandatory scheme onto producers and industry without a concerted effort by governments to enhance the current system is not justified.

“A nationally consistent approach and a set of agreed national traceability standards that are being met by all states is crucial,” he said.

“The current system, with some increased compliance by both government and producers, is capable of achieving the traceability standards nationally.”

“We have requested that the ministers remain committed to increasing compliance and working with industry to build on the system already in place” Mr Halliday said.