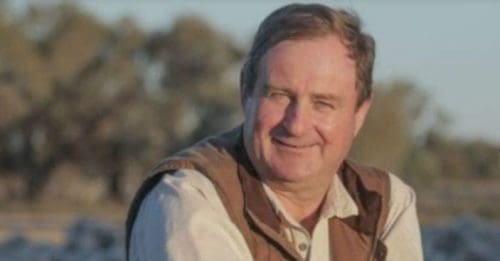 MORE market feedback on wool and meat consumer and brand preferences will drive change in the Australian flock on animal welfare issues, according to Pooginook Merino stud manager John Sutherland.

“More of that should be front page news,” he said.

“Agri-politicians and parliamentary legislation is going to be overrun by market access decisions made by end-retailers and consumers.”

“And what is going to drive change in the industry, I’m hoping, is letting people know about what the market is doing, being transparent with what we are doing and letting the market decide.”

The New South Wales-based Merino flock last week outlined its journey to no breech modification in a webinar, with other market and industry speakers.

Mr Sutherland said retailers’ behaviour is being driven by consumers and it is pretty clear that animal welfare has become an increasingly important criteria to get access to markets. He wanted to share Pooginook’s journey to start an industry conversation about the issue of changing attitudes of consumers and retailers to animal welfare and the implications for market access.

“The marketplace is changing, it is sending signals.”

Mr Sutherland he did not want to judge others or “fix the industry” and would not be drawn on the influence of breeder politics on industry change. But he said ram buyers all had “a choice on which driveway to drive up and they have to take ownership (of their flock’s direction).”

“The business owners and the managers have got to make a decision on the direction they want to go and call in their advisers to support them.”

Where were the stud breeders and classers?

Mr Sutherland said he estimated 95 percent-plus of those who registered for the webinar were commercial wool producers.

“Where were the stud breeders, where the agents and the classers listening to the comments on market access?

Mr Sutherland would not comment on the need or otherwise for further extension or research on breeding sheep for no breech modification.

“I encourage further transparency and sharing of the modern tools and experience available in the industry.

“What has got to drive this is people becoming aware of the market access (issues), they decide where they want to go with their sheep and they go down that journey and they seek out people who can help them in that journey,” he said.

“It has got to be driven by the sheep producer.”

He said assurance or integrity programs are providing auditable transparency of sheep products.

“That’s what I’m encouraging industry to do; to be transparent and to explain to our end-customers and retails this is the product we’ve got.

“If you are worried about animal welfare, this is how we do it, and let them know,” he said.

“And if mulesing is not a problem when you use pain relief then the market will tell you that.”

A recent research project funded by Australian  Wool innovation found that it might take between 11 to 20 years to reduce incidence of flystrike to less than one strike per 100 ewes per year in a Merino flock.

But Mr Sutherland said Pooginook was “well in front of that” although progress depended on “where you are starting from and how hard you go.”

“Depending on how aggressive you want to be, you can get there (to a non-breech modified flock) in 3-4 years.”

Mr Sutherland said it would take longer if a breeder wasn’t prepared to put selection pressure on ewes as well as careful selection of rams.

“And the second thing that is very important is, you have to be prepared to change your management.

“You have to be prepared to change your management, be flexible, open your mind and be committed,” he said.

“The first thing that gives sheep flies is body fault, wrinkles on the breech, but also urine stain and dag.

“Mulesing is not going to fix that, so why don’t you try to fix some of the dag?

“It’s selection and management; don’t let your sheep get wormy, then they get daggy and then flies, and then you are blaming the non-mulesing,” Mr Sutherland said.

“We feel there are much better animal welfare outcomes from no breech modification and that just transfer into better animal production.”

“I just want to emphasise if the sheep are fit for purpose, this will work with the proper plan.

“If they are not fit for purpose, I’m not suggesting they move away from their current practice.”

Animal welfare is a major market risk for Australia

He said traceability and the trust of markets is a whole of industry issue for meat and wool.

“That is where the future will lie, that we will have higher traceability.”

Demand for non breech modified wool is not going to slow

“Many would say it is unacceptably low, but we understand the difficulties and challenges that Australian producers have in this country, it’s different; we are not in Argentina, we are not in South Africa.

“But it’s unfortunately creating a negative view of the Australian wool industry and that is something I personally find really upsetting,” he said.

He said it is ridiculous to think that Australian producers cared less about their sheep than producers in other countries, but the mulesing debate

“For us, as a processor and a trade of wool, it is not for us to tell you how to care for your sheep, we wouldn’t do that.

“But the market will decide what is acceptable.”

Mr Marwedel said Schneider clients, particularly in Europe, but also in the United States, are demanding certified non-mulesed wool, but are also some form of quality assurance standard touching on issues such as human welfare and environmental impacts, he said. This led to Schneiders developing the Authentico scheme, which is now building a group of growers producing wool to the non-mulesed Responsible Wool Standard.

“It is quickly becoming the global standard that is accepted by the brands.”

This has created “pull-through” demand not driven from the production level. He said Pooginook and other Paraway farms are already RWS certified or on the way to certification.

Mr Marwedel said synthetics are the main competitors of Australian wool, not other countries. He said Australia has lost wool market share to other countries “related to mulesing”. Although he said there would always be a market for wool from mulesed sheep, he didn’t believe the momentum in demand for wool from non breech modified sheep would slow down.

He said perhaps Australia’s reliance on wool sales into China had slowed growers’ reaction to the issue. But he estimated 50pc of the wool going into China is manufactured for re-exporting into key markets like the United States and Europe.

“Markets in the US and Europe are heavily focussed on ethically sustainable products, so I think over time the Chinese manufactured exports to those countries will need to comply with those European and US standards.

“So no I don’t think it is going to slow down, I think the horse has bolted.”

On the issue of prime premiums for wool from sheep with no breech modification, Mr Marwedel said Schneider had customers who wanted non-mulesed wool ‘or they don’t care”.

But he said non-mulesed wools were significantly less-affected by the early COVID-19 market volatility and its production allowed greater connection with customers.

“I’m not aware of any supply chain partnerships that accept mulesed wool, there may be, but they are clearly in the minority.

“If any global brand that wants to put their name on a product and associate themselves with a raw material they are going to look for best practice.”

Mr Sutherland said issues around no breech modification raised by Pooginook ram clients have included health risks, loss of wool production, labour and paddock management demands and shearers. But ram demand from clients on a similar journey is increasing as is the need for information on how to managed sheep with no breech modification.

“If they (the sheep) are not fit for purpose, mulesing is an option that is very proven to work.

“I’m not suggesting you go down this path if your sheep are not fit for purpose, but generally those producers are waiting for a strong market signal or legislation to change,” he said.

Mr Sutherland said Pooginook’s no breech modification journey started 10 years ago with selection to plain the flock but maintain wool cut, using data and visual skills. A commitment was made in 2018 to stop breech modification in two years. The program has involved electronic tags, breech and cover scoring of lambs, ewe and ram classing, yearling and adult fleece measurements, skin monitoring, culling and selective mating, and genomics to predict the accuracy of breeding values.

“There will be no breech modification in 2021 at Pooginook.

“We just sell sheep that are not fit for purpose,” he said.

“We are just trying to use all the tools in the box, all the modern and technology to breed a more resilient and more animal welfare friendly and more productive sheep that is going to make us more sustainable.”

He said Pooginook was finding the sheep that could maintain or increase wool cut without breech wrinkle.

“Although they are antagonistic, stay with it, there are sheep that can do it and we are finding them.”

He also said growers should look using the RamSelect app to adjust their ram selections, but he said if growers wanted to “fast-track” their journey to no breech modification they must look at their ewes. Good structure and the right wool type across the body was also important, Mr Sutherland said.

“That (pre-operative anaesthetic) is compulsory in all other countries in Europe and mulesing is banned in Europe.”

New South Wales wool producer Nick Gay said careful classing of ewes and ram selection achieved a gradual “plaining” of his sheep, before he ceased mulesing. Management of breech wrinkle and flystrike had not been massive issues, even in wet years, he said.

“I think the biggest challenge for me and us as business was just changing mindset about what we were going to do and then being 100pc committed to that.”

This had involved being surrounded by a positive team including his wool broker, classer, ram breeder and contractors, he said.

Mr Gay said he had seen increased competition for his non-mulesed wool.

“We are still cutting the same amount of wool, but it is probably a better style now.

“We are seeing a significant increase in ewe fertility and (lamb) growth rate, simply due to going for that slightly plainer type sheep,” he said.

He has used the early breech wrinkle Australian Breeding Value and visual assessment in selecting for plainer breeches in rams, but balancing this with other fleece and carcase traits. The timing of a second shearing was also important to minimise flystrike, he said.

Mr Gay said he is not using more flystrike chemicals in his non-mulesed flock and this had been helped by breeding plainer-bodied sheep that are fit for ceasing mulesing and managing them effectively.

“There is no point jumping from the frying pan into the fire and ceasing mulesing and then having to smother your sheep in chemicals, because that’s no better animal welfare outcome and then you are just putting too much pressure on those products.

“What happens if, or when, they break down, it will be a disaster,” he said.

“In our specific example, we haven’t used any more fly prevention product; I haven’t Clicked in two years on my place.

“I’ve used shorter-acting product which were better suited to the management cycle such as shearing, but haven’t treated a mature sheep with a product like Click for five years,” Mr Gay said.

“You can’t solely rely on the chemical, it will only lead to issues.”

Mr Michael said the genetic tools and sheep were available to select for high follicle density on plain-bodied sheep.