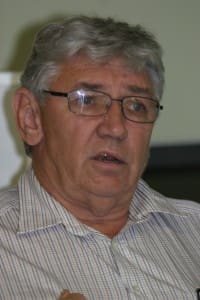 “We have an offer on the table that is quite frankly, pretty good.”

Mr Keane was concerned recent decisions on coal taxes might derail the process, but he had been assured by negotiators Australia had been offered a good deal on coal.

He said told beef and sheepmeat producers at Hamilton that Australia’s Minister for Trade and Investment Andrew Robb is due in China from November 2-6 and an announcement was expected during the G20 process in late November in Brisbane.

“I can’t, for obvious reasons, go into the detail of where it is, but let me say, the words ‘zero tariff’ are in play.”

Australia faces tariffs of 12-25 percent for beef imported into China and 12-15pc for sheepmeats.

Mr Keane said he was confident that the China FTA team was focussed on the interests of Australia’s red meat and livestock industries.

“The most important thing is to reduce the import duties as quickly as we can,” he said.

“It’s our biggest skin and hide market, and a fair offal.

“It’s a good sheepmeat market in particular, a mutton market more than lamb.”

However, the NZ–China Free Trade Agreement (FTA) outcome places the Australian red meat trade to China at a competitive disadvantage, though the impact of the NZ’s tariff advantage in sheepmeats is expected to be subtle in 2014, due to the country’s anticipated lower production.