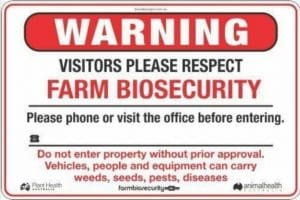 NSW Farmers is calling on state and federal governments to commit to a long-term funding model for biosecurity, suggesting a container levy as one option.

The state farming organisation is urging governments to secure a pest- and disease-free future, suggesting plans to grow a strong future for agriculture will fly out the window if state and federal governments fail to recognise biosecurity as a top priority.

“One of the main assets of the Australian agricultural sector is our so-called ‘clean and green’ status.

“It’s what drives demand for our food and fibre globally and it is basically why our produce carries a high premium here and overseas,” Mr McColl said.

“We acknowledge and appreciate the state and federal governments’ funding commitments to biosecurity over recent years, but biosecurity is not a ‘tick and flick’ issue, and we need surety there is a long-term and sustainable model in place to bolster our defences against incursions.”

NSW Farmers said one example of a long-term funding model was a container levy, which it supported due to its potential to improve biosecurity measures. For a very small fee, state and federal governments could strengthen our borders against disease and pests, the association said.

Mr McColl said a single, widespread disease outbreak could cause billions of dollars in economic loss, not to mention extensive damage to our agricultural and native plants and animals.

“If we had a foot-and-mouth disease outbreak it would have a huge impact and shut down many exports overnight.

“This would have a major flow-on effect in our regional and rural communities and cost the Australian economy an estimated $50 billion over 10 years,” he said.

“We recently saw two live-rooted rose plants intercepted in Sydney; they had the potential to bring in a disease that would infect vineyards and could potentially decimate our wine industry.

“The threat of African swine fever continues to loom large over our pork industry, and regular detection of contaminated pork products at our borders highlights the real risk we face of an incursion.”

With the CSIRO warning of an increasing risk of disease outbreaks and is urging Australia to adapt its biosecurity model, Mr McColl said the nation must take meaningful action before it is too late.

“There’s no second chances when it comes to biosecurity,” Mr McColl said.

“We need to strengthen our borders against threats, and we need to ensure the NSW Department of Primary Industries and Local Land Services are adequately resourced to respond to pest and disease outbreaks.”