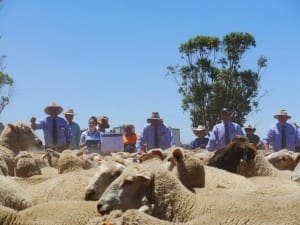 Buyers from throughout NSW, Victoria and SA attended the dispersal of the 10,000 head crossbred and 18 micron Nerstane-blood Merino flock, following the sale of the property near the Victoria-SA border.

Selling agent TDC Penola’s Rob Handbury said the first cross ewes and Merinos joined to Border Leicester rams sold about $30 above expectations, reflecting the strength of the lamb market, and the classed unjoined Merino ewes sold $10-$20 below what was hoped.

“It takes a specialised breeder who is concentrating on the Merino who is looking for classed ewes to pay premium money for them.

“To an extent yesterday we didn’t see those premiums for the unjoined classed Merino ewes,” he said.

“But we saw solid competition on the classed Merino ewes which represented fair value to both buyer and seller, and all the Merinos joined to Border Leicesters sold extremely well.”

TDC Penola auctioneer Darren Maney said all the smaller-framed Merino ewes classed out of the main flock and joined to Border Leicester rams, apart from the 5.5-year-olds, made as much as the classed-in unjoined ewes.

Mr Handbury believed many of the unjoined classed Merino ewes sold in the sale will be joined with Border Leicester rams to supply the ongoing demand for first cross ewes for prime lamb production.