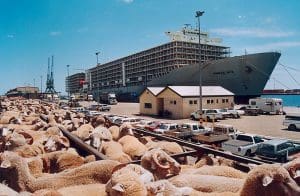 President of the Australian Livestock and Rural Transporters Association, John Beer, said the footage shown on 60 minutes last month demonstrated that current practices, monitoring, reporting and penalties applicable to live export vessels are not always delivering the animal welfare standards expected by the community and the livestock supply chain.

“We should not back away from this problem and leave it to other countries to resolve.

“Australia must identify the root cause of the issue and lead the way by putting the right type of oversight in place as soon as possible,” Mr Beer said.

The association also backed moves by the Federal Minister for Agriculture, David Littleproud, to instigate a comprehensive review of the capabilities, investigative capacity and culture of the Australian independent regulator for live exports and the establishment of a whistle-blower hotline.

Mr Beer said Australian livestock carriers lead the world in protecting the welfare of live animals during road transport and there is no reason why international shippers shouldn’t be held to equally high standards.

“Caring for live cargoes is a necessary part of the rural road transport task that is under constant scrutiny by markets, governments and the community,” said Mr Beer.

He said as a first world nation with modern values and an enforceable rule of law, it is important for Australia to play a leading role in improving live export standards.

“Over 130 countries around the world export livestock, but in establishing the Australian Standards for the Export of Livestock and requiring that all exported animals be slaughtered in approved premises, Australia has gone further than any other nation to protect animal welfare.

“Asian and Middle Eastern markets simply cannot afford to substitute live imports with chilled boxed meat, nor does Australia have the capacity to supply it,” he said.

“We already have some of the world’s best live exporters operating in Australia, so rather than surrendering the live export trade to less regulated competitors, we must take a hard look at this incident and do what is necessary to lift our standards further.

“Other nations rely on Australia to supply food to their growing populations and our domestic livestock supply chain benefits from international trade.”

“Even so, our National Animal Welfare Committee has scrutinised our role in the supply chain and championed several important animal welfare initiatives.”

“Our association now has a holistic approach to promoting positive animal welfare outcomes that commences with pre-transit livestock preparation, through loading, transport, unloading and emergency responses in the rare event that things go wrong.”