A CALL for Australian livestock breeders to protect valuable genetics against the impact of an exotic disease incursion has been supported by former Victorian Chief Veterinary Officer Dr Charles Milne.

In his latest livestock market wrap on Sheep Central, Mr Howie suggested seeing their life’s work disappear because of an outbreak would be too hard to comprehend for many livestock  breeders. 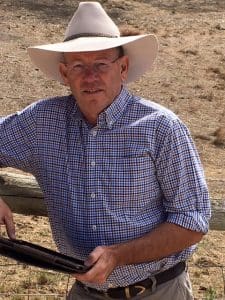 Based on the UK FMD protocols and his personal FMD training in Nepal, Mr Howie said it is important to know if an enterprise is captured within a disease containment circle.

“There is no room for negotiation about the breeding value as industry will follow the cull protocols to eliminate the outbreak risk,” he said.

Dr Milne said Australian farmers who own genetically valuable livestock should seriously consider protecting their assets through the use of stored semen and embryos.

He said following the FMD outbreak in the UK in 2001, the issue of breed protection was considered in a number of reviews and publications.

“This led to the publication, in 2006, of the UK National Action Plan on Farm Animal Genetic Resources,” he said.

“It recommended that a web-based National Breed Inventory be developed and re FMD that a robust definition of a nucleus unit essential to the survival of the breed, with or without cryopreserved genetic material should be developed.

“All this has resulted in a number of initiatives including the UK National Livestock Gene Bank run by the Rare Breeds Survival Trust,” he said.

“In addition, high value genetic herds and flocks have been split and housed on different premises with completely separate management.

“Some farmers have also developed semen and embryo banks.”

Dr Milne said he has not seen an assessment of the genetic costs of the UK FMD outbreaks, although speaking to individual pedigree breeders, the impact was devastating both financially and emotionally.

“Again I have no specific information on speed of recovery but again anecdotally several producers have said to me that they wished that they had had the foresight to store genetic material.”

A Department of Agriculture, Water and Environment spokesperson said a comprehensive range of plans is in place to deal with an emergency disease outbreak.

“These plans are revised and updated on a regular basis as part of continuous improvement processes.

“The Australian Veterinary Plan or AUSVETPLAN is the central plan for controlling and eradicating an outbreak,” he said.

“The series of AUSVETPLAN documents outline how we would respond to a disease (one for each disease), and these manuals are nationally agreed.

“There is also a national relief and recovery co-ordination framework,” the spokesman said.

“This framework sets out roles and responsibilities in dealing with the economic and social impact of a disease outbreak and returning communities to normal after an outbreak.”

The spokesman did not answer questions on whether the AUSVETPLAN culling protocols in an FMD incursion would give any consideration to the genetic value of livestock on farms.