Dehumidification units in operation during the trial involving a live export vessel in Dubai.

DATA captured during a $2.2 million dehumidification trial on a livestock export vessel is now being analysed, Livecorp said last week.

The trial is being done to help determine whether the technology has commercial potential as a heat stress mitigation tool for the industry.

The industry’s research and development body, LiveCorp, carried out the ‘static’ trial, mooring an empty ship in Dubai for a week while dehumidification units set up on the wharf pumped modified air into several decks to test the impact on temperature and humidity. 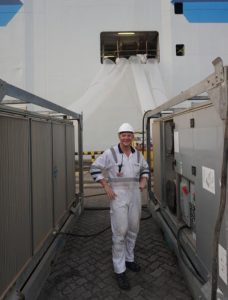 LiveCorp chief executive officer Sam Brown said dehumidified air was piped into the vessel at different rates over several days, with the atmosphere on the decks allowed to come back to the outside conditions in between each test.

“Running the trial in the Middle East in summer aimed to provide the biggest test of the technology, with a variety of automated loggers measuring temperature and humidity, as well as the combined, all-important wet bulb temperature.

“Specialists in thermodynamics, technology providers and other experts in research design made sure all the variables were taken into account and the best, practical trial methodologies applied,” he said.

Dehumidification units are already commonly used in industries such as deep mining, and have even modified the air around a lighthouse to allow a fresh coat of paint to dry. However, Mr Brown said a livestock vessel is a unique environment and there is no guarantee of success.

“It has taken more than 12 months to get to this stage, after getting exporters around the table to discuss exactly what problem we needed to solve, and then putting out a global call for agtech start-ups and innovators in other industries to put forward solutions.

“We are confident in the rigour of our process, and even if we don’t get the answer we’re hoping for, the analysis being done will guide further research on how best to manage heat stress on livestock vessels,” he said.

“Australia plays a valuable role in supporting food security in the Middle East, as well as providing an important market for sheep producers in Western Australia.

“LiveCorp has been conducting research into heat stress, and more generally animal welfare, for 20 years,” he said.

“This latest project will add to the wealth of knowledge and continue to improve outcomes on livestock export voyages.” 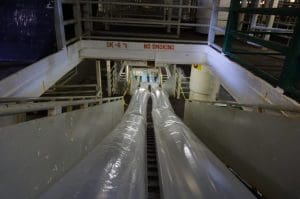 Dehumidification ducting on the vessel.

The dehumidification trial is funded through an Australian Government grant of $2.2 million.