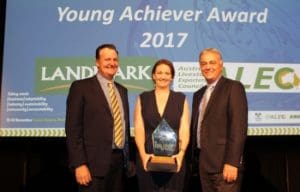 AUSTRALIAN livestock exporters have celebrated two of their highest achievers at the industry’s annual Gala Dinner in Perth on Thursday night, held as part of the LIVEXchange 2017 conference last week.

”I congratulate Holly on her outstanding contribution to our industry and wish her further success in the future,” Mr Crean said.

LiveCorp chairman Terry Enright said that Mr Daws had made an extraordinary contribution to the industry over almost five decades.

“Graham and his family have had a huge impact on Australia’s livestock export industry, especially as a driving force in the live sheep trade from Western Australia to the Middle East.

“His place in the industry’s Hall of Fame is thoroughly deserved,” he said.

2017 Landmark/ALEC Young Achiever of the Year

Dr Holly Ludeman is an experienced livestock export industry professional, working in compliance and welfare roles. The live trade allows Holly to combine her veterinary qualifications with her passion for high animal welfare standards and working with livestock.

Dr Ludeman’s first taste of the livestock export industry came when she was awarded the Wellard Livestock Welfare scholarship in her final year of her Veterinary Medicine and Surgery studies. The scholarship enabled Holly to travel with a consignment of cattle from Townsville to Jakarta, and then onto feedlots, abattoirs and local markets in Indonesia.

After some time in private practice, Dr Ludeman started working in the livestock export industry in 2013 as Livestock Shipping Services’ Operations and Compliance Manager. She joined Harmony Agriculture and Food Company earlier this year.

The roles enabled her to gain extensive experience working in importer supply chains with veterinarians, quarantine officials and other in-market stakeholders to uphold the control, traceability and welfare of Australian livestock.

“It’s inspiring to think about how we are constantly working with our partners in importer markets to improve education and knowledge of animal welfare and efficient, ethical food production,” Dr Ludeman said.

“The social and cultural challenges of the live trade are real, but I look forward to continuing to work in this industry because I’m passionate about the livestock industry.

“I’m proud of the way we are embracing our social licence to operate, with greater transparency and modern operational systems,” she said.

As part of the Young Achiever award, Dr Ludeman will participate in the eight-day, cross-sector Australian Rural Leadership Program’s 2018 TRAIL program in Canberra. 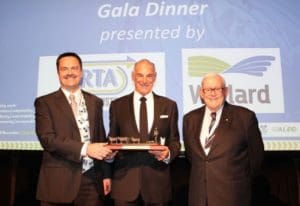 Graham Daws joined Emanuel Exports in 1971, a company his father Tom had incorporated in 1955 after serving in the Middle East during World War Two and seeing the potential to export live sheep.

Emanuel’s first shipment to the Middle East sailed from Fremantle in 1960 on the “Alondra” with 2500 sheep. Regular trade grew from that point, with Emanuel operating as the exporter, Kuwaiti businessman Yacoub Al Homaizi as the importer and the C. Clausen Steamship Company as the carrier.

In 1974, Mr Daws and his Kuwait associates formed Rural Export and Trading WA (RETWA) and associated companies, which was later sold to the Kuwaiti Government and a public company formed by Mr Al Homaizi to service the Arabian Gulf with live sheep and dairy cattle.

Mr Daws has gone on to play a central role in Australia’s live sheep trade to the Middle East, as well as serving in numerous industry leadership roles. He was a founding member of the Western Australian Livestock Exporters’ Association upon its establishment in 1977, serving as WALEA Chairman from 1986-1991.