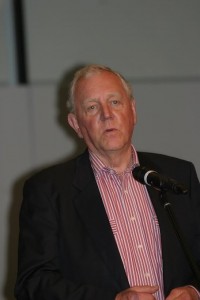 Mr Wyld said more work was needed to establish a rational framework for an eNVD “so that we have a truly national system that everybody and anybody can participate in”.

Business rules to “drive the system” have been drafted and circulated, he said.

“We are also drawing up licensing conditions so that all software providers who participate operate under the protection or comfort of a license arrangement.

“That then entitles them to access the information they need to access, such as checking LPA status and the NLIS database,” he said.

“We need to be able to drop the flag or the start button anytime within weeks to allow the software providers to work out how they are going to participate.”

Mr Wyld said Safemeat expected to start pilots or trials in several locations around Australia, involving a meatwork, feedlot, saleyard and producer situation mid-year to eliminate any “bugs” in the proposed system.

“We will be doing that in the middle of this year … on a limited basis on selected sites.

“We had hoped to do it by May-June, but it is hard to be precise.”

Mr Wyld said software providers who participated in the recent Meat and Livestock Australia StockDEC project or the Livestock Saleyards Association of Victoria trials would have to see if their systems fitted in with the proposed eNVD business rules.

“So until they have got some software ready to go, we can’t operate any pilots or trials.”

Mr Wyld said it is proposed that all eNVDs will go through a central “post box”.

“It won’t be driven centrally, but they will all go through a central post box … and all eNVDs will be required to have their core information centrally archived.

“So if that is there is an emergency or a requirement to trace rapidly there is a one-stop shop to go and look at NVDs,” he said.

“But that does not release all the players of their obligations to maintain their records according to state law.

“We are hoping that by going electronic we are going to get rid of these container loads of dusty paper tied up with string round the back of agents and saleyards etc.”

Paper NVDs will still be available

But Mr Wyld said the current paper NVD system would remain in place for as long as it is required.

“For those producers who feel nervous about going electronic or who don’t have mobile coverage or a computer, they can continue to use the book.”

An eNVD system would help overcome the industry’s problems with ongoing updating of NVDs to meet changing market requirements, he said.

“We are hoping that by going electronic you can actually change the form quite quickly, although it still won’t be instantaneous.

“It still won’t happen overnight, but it will be a lot easier, less expensive and a lot less hassle.”

The paper NVD system will continue to get more expensive and be delivered on a cost-recovery basis, he said.

“Whereas we will use industry funds to create the post box for the eNVDs, and we hope any charges to buy software apps will be fairly modest.

“Industry will be standing the cost of maintaining the (eNVD) system, but hopefully it will be commercially driven at the sharp end and be innovative,” Mr Wyld said.

“We are trying to have a compromise between being a bureaucratic central system and an innovative nimble flexible system at the coal face.

“So we are trying to get the best of both worlds and time will tell whether we succeed.”

Agents will need authority to generate eNVDs for clients

Under the proposed system, stock agents will be able to generate the eNVDs on behalf of producers, provided they have a third party arrangement in writing, same as for the National Livestock Identification System database, Mr Wyld said.

“What we don’t want to do is put the responsibility back on the agent.

“Agents don’t want that responsibility, they have never sought it,” he said.

“It will be a pretty rigid formal process to do that, it won’t be Rafferty’s rules.”

Victorian trials found no serious issues with an eNVD

The current national Safemeat eNVD project grew out of the results of the MLA StockDEC and LSAV projects. The LSAV last week released its final project report concluding that there appeared to be no serious technical issues in converting to an electronic NVD.

The report also said each hardware platform had its own group of supporters, but a smart phone option was well supported by the younger trial participants.

The project also found that integration of eNVD’s into existing post farm systems (feedlots, processors, saleyards) would provide significant benefits including more timely and accurate data as well as reduced administration time. The successful rollout of an eNVD system would require significant training and support input to the broader industry, LSAV said.

LSAV chairman Cr Stuart McLean said the project was designed to not just convert the current hardcopy NVD form into an electronic database record, but to look at ways to enhance the digital capability across the livestock marketing chain.

“This could involve sending extra on farm information with the NVD data, integration with existing saleyard and processing systems and links with transport logistical systems.”

The LSAV trials covered most of the livestock marketing avenues for sheep, cattle (dairy and beef) and bobby calves. This included saleyards, feedlot systems as well as direct to processor sales. The trials included marketing chains for bobby calves, chopper cows, sheep and beef cattle to test digital options for generating electronic NVD’s at the farm gate and their integration with saleyards and processors.