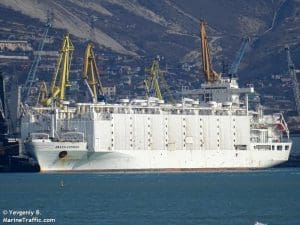 Mr Littleproud and the Australian Livestock Exporters Council have condemned the on-ship conditions shown in the footage, set to be featured in an exclusive 60 Minutes report this Sunday.

Mr Littleproud said Animals Australia indicated the vision is of live shipments of sheep sent from Perth into parts of the Middle East during 2016 and 2017.

“I’m shocked and deeply disturbed by the vision.

“I thank Animals Australia for bringing this to my attention,” he said.

ALEC said the Animals Australia video footage was highly distressing and unacceptable to the industry, producers and the community.

ALEC was shown the footage by 60 Minutes this week, although copies of the video are not being released by Animals Australia due to an exclusive agreement with the Channel Nine program.

“Even if the circumstances can be explained, these deaths are plainly unacceptable,” ALEC chief executive officer Simon Westaway said.

Mr Littleproud said he received an incident report from the Department of Agriculture last Thursday about a voyage involving live sheep to the Middle East in August 2017.

“I immediately requested an urgent briefing from the department and wrote to industry asking what research they’ve undertaken about high heat mortalities.”

About 2400 sheep reportedly died on-board the Awassi Express in a consignment of 63,804 sheep and 50 cattle loaded by Emanuel Exports at Fremantle on August 1 2017. The vessel was bound for Qatar, Kuwait and United Arab Emirates.

A mortality rate of 3.76 per cent was recorded for the voyage, exceeding the reportable mortality level of 2 percent as prescribed by the Australian Standards for the Export of Livestock. Most of the the mortalities were reportedly caused by heat stress. No cattle mortalities were recorded. There was a discrepancy of 195 sheep on the final unload count in the UAE, which if added to the reported mortalities, would have raised the rate to 3.79pc.

Mr Littleproud said an environment needed to be created where groups, whistleblowers and individuals were comfortable and confident to come forward “so we can nail those who do the wrong thing”.

“As I’ve said many times since becoming Minister for Agriculture and Water Resources in December 2017, we need compliance with laws across all industries to give us integrity.

“This requires exporters, the industry and the regulator (the Department of Agriculture and Water Resources) to fulfil their full responsibilities,” he said.

“I will not be afraid to call out and take strong action against those who have not fulfilled their responsibilities, whether they be the exporter, the regulator or staff on ships.”

Mr Litttleproud said he supported the farmers who rely on live export and the exporters who do the right thing.

“We need this trade for our farmers.

“Farmers care for their animals and they’ll be angry and hurt when they see this footage,” he said.

“We need this trade to be conducted properly and sustainably for our farmers for whom the live trade provides a vital market, as well as for the animals themselves.

“I’ve met with the Department of Agriculture today and it will urgently investigate information it is due to receive this afternoon. I’ll have more to say as more information comes to hand.”

Australian farmers and community will be shocked

An Animals Australia spokeswoman said the announcement by Mr Littleproud “speaks to the seriousness of this situation and the strength of the evidence provided to the government.”

“Australian farmers and the community will be shocked by what they see and hear on 60 Minutes on Sunday night.

“Animals Australia is committed to working with the government to ensure laws are upheld and offending exporters are held to account,” she said.

The DAWR report into Emanuel Export’s August 2017 Awassi Express shipment said the Australian Maritime Safety Authority concluded all livestock services on the ship were operating satisfactorily during the voyage.

Actions were taken to mitigate heat stress, extra crew were rostered on to undertake additional housekeeping and to prioritise watering to hand watered troughs, excessively boggy pens and those in hotter areas were opened to allow sheep access to alleyways and some pens were joined by closing of cross ship alleyways, the report said.

When high heat and humidity started to affect sheep, individual animals identified as heat affected or bogged were removed into alleyways near ventilators. Livestock was further spread out across the vessel as more space became available following discharge at each port. These actions however, were insufficient to prevent the reportable mortality incident, the report summary said.

The department required Emanuel to comply with a heat stress management plan for their next consignment to the Middle East using the same vessel, that consignment was exported in September 2017. The plan outlined risk mitigation strategies for all stages of export, including a 10pc reduction in stocking density to that prescribed in the Australian Standards for the Export of Livestock (Version 2.3) 2011 (ASEL). The voyage recorded a mortality rate 0.52pc.

The department’s investigation found the sheep were prepared and transported in accordance with Export Control (Animals) Order 2004 and the ASEL Version 2.3 2011. The department is considering a revised heat risk management plan from Emanuel to address the risks associated with consignments exported to the Middle East during the hottest months (July/August). These changes will be implemented in 2018, the DAWR report said.

Emanuels Export managing director Graham Daws said high mortality incidents like those in August 2017 on the Awassi Express are devastating.

“Emanuel Exports has taken steps over more than six months to address the issues arising from our own extensive review of the voyage and the findings from the Federal Department of Agriculture and Water Resources investigation.

“This includes reduced stocking rates in summer up to 15pc beyond the ASEL benchmark,” he said.

“Australia’s livestock export industry remains accountable and transparent and Emanuels continues to work in a fully cooperative manner with the regulator,” he said.

“The viability of the live trade relies on the wellbeing of the animals in our care.

“When animal welfare is not upheld, we jeopardise the food security of our overseas customers, the future of a significant long-standing market for producers and the support of the community.”

More needs to be done – ALEC

THE Australian Livestock Exporters’ Council has welcomed the release of the DAWR investigation report into the Awassi Express voyage in which 2400 sheep died.

“Our performance is always under scrutiny.

“The range of livestock mortalities since 2010 has been between 0.6-0.9pc and is trending down, but our industry is determined to achieve better outcomes,” he said.

“We’re committed to further reform and ongoing improvement in terms of animal welfare in our $250 million live sheep trade.

“We support the Federal Government’s current review of the Australian Standards for the Export of Livestock and we have also actively participated in AMSA’s review of livestock shipping.”

Mr Westaway said the August 2017 voyage struck extreme heat and humidity at Doha, the first port of call due to the blacklisting of Qatar by other GCC countries at the time.

“Even if the circumstances can be explained, these deaths are plainly unacceptable.

“Exporters work with DAWR to manage the recognised risks associated with exporting to the Arabian Gulf in the northern summer due to the seasonal heat and humidity, but more needs to be done,” he said.

Mr Westaway said the industry was negotiating for Kuwait to be the first port of call for Gulf shipments because it presents fewer heat-stress risks. Precautions including loading up to 15pc lighter of sheep volumes than ASEL requirements for northern summer shipments have also been formally agreed to by the exporter and DAWR.

“These steps are in addition to the industry’s long-standing climate control programs for shipping which statistics show has helped to further reduce mortalities and heat-related welfare risks.

“Our industry’s ‘no fear, no pain’ objective might seem ambitious when a tragedy like this occurs, but we’re committed to it because alongside our moral obligations, good welfare is good for business.”

Click here to read the full DAWR report into the Awassi Express voyage.