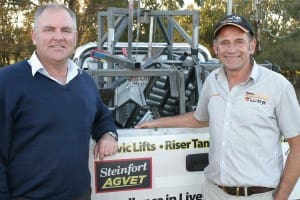 Liquid nitrogen application was showing promise as an alternative to the surgical mulesing of sheep, Merino breeders were told at the Elders Balmoral Sire Evaluation field day at Casterton, Victoria, last Friday.

The woolgrowers were also told a decision on the registration by the Australian Pesticides and Veterinary Medicines Authority of another mulesing alternative – SkinTraction – was expected within weeks.

Mr Lindon said commercialisation of SkinTraction has been delayed until the APVMA made a decision on SkinTraction registration. But if it is registered, more development work would be required.

“It’s probably looking very promising at the moment,” Mr Silcock said, although Mr Lindon said development of the process was in its very early stages.

The process with sheep mimics surgical mulesing and involved the clamping of wrinkles and excess skin around a sheep’s breech and tail, and spraying it with liquid nitrogen. The clamped skin is frozen, causing slow necrosis or cell death, and within 8-9 weeks it sloughs off, he said. This slow healing process provides minimal impact on the animal’s welfare.

“In doing that we are looking at breech stretch and good skin baring around the tail edges to minimise flystrike.”

Liquid nitrogen use on sheep was still in development, but the latest system, using a VE-machine loading weaners into overhead cradles, enabled operators to process up to 80 in an hour.

“Our average was about 70 per hour; that was with two processors.”

A farmer involved in the trial said the liquid nitrogen sheep handling system had progressed to a rate of about 500 sheep a day.

“It seems to be doing the job, reducing the wrinkle and increasing the bare area around the tail, so it is only positive from what I can see — I think it’s got a future.”

The farmer believed the current trial processing rate of about 500 sheep a day was probably a “little bit slow” for commercial woolgrowers.

“They can still improve, they are still fine tuning I think, it might get up to 700 or something without too much tinkering and that’s probably acceptable.”

Lambs or weaners can be treated

Using the system under development, Dr Steinfort believed liquid nitrogen application could be done at lamb marking or as weaners, after shearing.

Dr Steinfort said wool growers might have the option of marking Merino lambs and applying a flystrike control chemical for the summer, and then using liquid nitrogen after the first shearing.

The trial system involved cradles holding sheep upright for loose skin presentation, he said. Sheep were released from the cradles standing up.

“You don’t need pain relief, because the nitrogen does that in its own right during the healing stage, but further welfare trials are planned.

In trials, the liquid nitrogen process had been able to reduce breech wrinkles on highly wrinkled weaners from score 4 to 2, Dr Steinfort said.

“On one of the case studies, after a four-month period you can see that we reduced the tail wrinkle by 1.9 wrinkle scores, and the breech and dag score by 1.4.

“So it physically made quite a difference to those animals.”

“We can deliver liquid nitrogen to the skin in about three seconds, to get a complete freeze.”