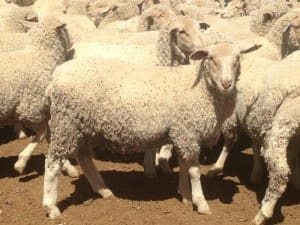 These White Suffolk-Merino cross lambs, 17kg cwt and mostly score 2, sold for $103.50 at Nyngan, NSW, on AuctionsPlus this week.

Light lamb prices held firm to cheaper at Tamworth and Forbes, but finished at similar per head and cwt rates as the other NSW centres.

Light lambs also sold slightly dearer at Ballarat and at Dublin in South Australia, where 12.1-18kg lambs with skins valued at up to $12 made up to $107 and reached 638c/kg.

Elders livestock manager at Bendigo Nigel Starick believed the light lamb prices were being driven by export demand and strong restocker demand for store lambs. He attributed the lift in trade and heavy lamb prices to lower yardings and less quality in drafts.

“You are getting a good run at the start of your sale, but then it drops off very quickly.

“There are opportunities for the restockers to get in and buy those 17-18kg cwt lambs that are plain, instead of buying 15-16kg, so you are picking up a bit of weight to start with.”

Markets were just “running out” of top heavy lambs, he said, with people struggling to finish lambs except in feedlots on grain and pellets.

“We just can’t get a rain, but the store job is still going well.

“You can’t buy a store ewe, they are just so dear and I think going forward females are going to be as dear as poison.”

The ESDI and national mutton indicators lifted 8 cents to 311c/kg.

In New South Wales, the NLRS quoted over-the-hook lamb rates as unchanged this week. As supplies tighten most are taking a wait-and-see approach for price adjustments. Mutton rates were unchanged across all weight ranges.

In Victoria, the NLRS quoted over-the-hook indicators as relatively steady, with only one contributor making minor downward adjustments to rates. Mutton rates were higher across all weight ranges.

In South Australia, the NLRS quoted over-the-hook indicators as firm, with many taking a wait-and-see approach as supplies tighten. Mutton rates were mainly firm.

Western Australia’s upodate OTH rates were not available when this report was published.

The NLRS said there were some excellent heavy weight lambs and a reasonable selection of trade weights. There were also a couple of large consignments of light weight Merinos and crossbreds.

There were good numbers of top woolly Merino ewes and fair numbers of lighter weights in a good quality yarding of mutton. Most grades were $4-$6 dearer, with 2 score ewes selling from $40-$75. The better 3 and 4 score crossbreds sold from $54-$105 and woolly Merinos made to $118. Well-finished Merino wethers sold from $86-$109.

The NLRS said lamb quality was mixed, with a good selection of trade and heavy weights. Secondary quality lambs were also in fair numbers. The usual buyers attended. There was reduced restocker activity, but this was counteracted by a light trade lamb order.

The sheep were mostly light and medium weights with fewer heavy weights. Wuality and condition was fair to good. Trends were dearer throughout, up to $3, with weight related increases noticeable in the few heavy wethers.

The NLRS said lamb quality was very mixed. There were some good lines of well-finished lambs and some plainer drier types. The usual buyers competed in a market that started firm, but got cheaper as the sale progressed.

Prices for trade and heavy lambs were generally $4-$5 dearer in a fluctuating market. Bidding on heavy export lambs was patchy at times, and some sales were softer than a week ago, although the overall result was stronger. The highlight of the sale was demand for light lambs suiting restockers and processing orders which gained another $4-$10.

The market reached a top of $180 for a pen of extra heavy export lambs estimated at around 34kg, coming from the same property which sold the top-priced $175 lambs a week ago. Demand for heavy lambs was patchy and only a handful of pens made over $165, with most sales from $148-$160. Some heavy export lambs tracked under 500c/kg cwt, but the market average was an estimated 500-510c/kg.

The lead pens of heavy trade lambs sold from $128-$145, but most were plainer types which made from $115-$125. On a carcase basis, trade lambs averaged an estimated 510c-530c/kg, with less paid for secondary types. Carcase weight prices of up to 540-550c/kg were recorded for the best quality pens suiting the top domestic kill orders.

Light lambs suiting restockers or processing were keenly sought, with most sales from $88-$110. There were more Merino lambs this week and quality was also better, with one stand-out pen off grain estimated at around 24kg, with a $22 skin, selling to a top of $143. Most of the lighter trade Merino lambs sold from $94-$110 and trended around the 500c/kg-mark in a stronger result.

The mutton sale included some bigger and better lines of Merino and crossbred sheep compared to the patchy yardings of the past fortnight. Not all export orders operated, but the sale was more consistent and dearer than a week ago. Heavy Merino ewes in a big skin sold to $115 and extra heavy crossbreds made to $108. Light sheep were also dearer.

Ballarat’s trade lambs lift up to $4

The NLRS said an average to good quality lamb yarding was offered to the usual buyers.

Heavy lambs were well-supplied and with more interest this week the best extra heavy lambs reached $186, with an estimated carcase weight of 35kg. The better covered lambs suiting domestic orders sold from unchanged to $4 up on last week, while the heavy lambs sold mostly unchanged. Restockers, feeders and processors competed keenly for suitable lambs and most light lambs were a few dollars dearer. Restockers paid from $84-$124 for better lambs and from $52-$75 for lighter lots.

At the South Australian Livestock Exchange at Dublin on Tuesday, the agents yarded 7733 lambs, 1526 fewer than last week, and 2646 sheep, 644 less.

The NLRS said the very mixed quality yarding of crossbred and Merino lambs sold to stronger bidding from the usual trade and processor buyers. The sale started strongly, before tailing off during the latter part of the sale. Feeders and restockers were cautiously active, and were content to concentrate on well-grown trade weight lambs and the large numbers of light weight Merino lines.

The NLRS said lamb quality was mixed for the usual trade and processor buyers, restocker orders. The market generally sold to a softer trend.

All the usual buyers attended, but competition for trade lambs eased on quality, with most sales back $3-$5. Light restocker lambs were dearer. Very light lambs sold from $17-$68 to restockers, with the merino drafts averaging $43, close to $10 dearer. Light lambs suitable for feed and air freight processors sold firm at $61-$94. Trade weight lambs sold from $70-$116, to average around $4 easier, with some plainer categories back by up to $9. Heavier drafts made $105-$126, back $5. Better trade and heavy weight lambs averaged close to 495c/kg and plainer drafts around 475c/kg.

Ewe numbers were up and there was less weight in the ewe mutton drafts, but most sold firm to marginally dearer. Mutton sales again firmed, the light weight ewes firm at $25-$54. The 2 score medium weight processor mutton made $45-$68 to be back around $2. Better conditioned and heavy weight ewes made from $53-$81, mostly $2-$5 dearer. Restockers purchased suitable drafts at $49-$70, with most sales firm to $2 dearer than last week.

Prices were close to firm for the limited wether and ram offering. Bare shorn export wethers made $80-$100 and drafts longer in wool sold to $111. Light and store wethers sold to restockers and feeders for $45-$120, with the dearest wethers carrying close to a full fleece. Rams sold to the trade for up to $106 and live export drafts made $40-$94. Old rams sold to processors for $5-$48, similar to last week.