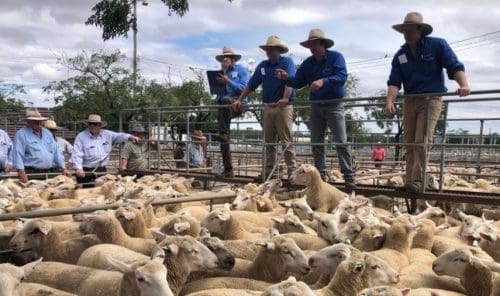 LOWER supply continues to underpin solid saleyard demand for lambs and mutton across Australia this week despite less demand from some export sectors.

Although export demand for heavy lambs is being affected by the loss of cruise ship and overseas food service demand caused by the COVID-19 pandemic, buyers are still paying up to 800-850c/kg-plus for good quality lines, with some releasing forward contracts into winter of up to 900c/kg.

Trade lamb rates have stayed firm this week, generally ranging from 850-900c/kg, and some domestic processors are also buying up into the 26kg-plus lines to get quality for cuts.

Restocking demand has been limited in some saleyards – although not in the south — partially because it is traditionally a slower period for restockers and the current prices, but also as many lines are being marketed online. In some saleyards, restockers and feedlotters are reportedly buying through processor buyers due to COVID-19 restrictions on saleyard attendances.

But it is the lighter 12-18kg Middle East Kill, MK or bag lambs, that have more consistently maintained their prices, with preferred lines, Merino or crossbred, making 1000c/kg-plus and up to 1200c/kg, to be competitive with recent online sales.

Despite only a few exporters operating strongly on sheep – Fletcher International Exports and Cedar Meats — strong overseas demand and limited supply has kept rates at 650-700c/kg plus, with more being paid per cwt for lighter and medium weight lines.

FP Nevins and Co director and auctioneer, James Nevins at Bendigo, said prices were cheaper for the heavy end of the export lambs this week, but trade weights, feedlot-type and bag lambs were well-sought after in Monday’s market.

Mr Nevins said more product from the heavy lambs was staying onshore, with some going to China, the United States and parts of Europe, but cuts such as racks would usually go into the depressed cruise ship trade.

Bag lambs down to 12 kg cwt were being sought by a range of exporters, he said.

Mr Nevins said the current rates for restocker lambs is taking some buyers out of the market, as they balk at paying up to about 1000c/kg for turn-out lambs when the market is indicating the return price might be 800-850c/kg later on. He said skins are “pretty well worthless.”

Mr Nevins said he had seen an export lamb contract of 850-900c/kg for August released last week by a processor, but then pulled unfilled in a few days, as the company reconsidered its position.

He said the mutton job was “off the planet” although there were only a few main players.

He said demand for trade lambs was still good — with more lines being grain-fed and “supermarket-friendly” – but provided lambs are within the correct weight range.

Forbes Livestock and Agency Co’s Randal Grayson said the weight of lamb and sheep numbers was not an issue in saleyards currently.

“If there was a normal supply (of lambs) at this time of the year, there would be a bit of pressure on this job, but the moment the low numbers is keeping it stronger than where they want it to be,” he said.

He said although exporters was struggling with overseas demand, domestic demand was strong with supermarkets still putting out contracts around 900c/kg for June.

“That shows they still want to shore up a bit of supply and are happy to put $9-plus out, which is outstanding.

“It just shows you what this market could have been without this coronavirus – it was something that was unforeseen – and it would have been unbelievably good.”

“But for the in-between bracket of the heavy trade-light export lambs — 25-29kg – if the quality is good they will sell well, but if they are a little bit off, they are the ones that are probably seeing the biggest drops in the market.”

“Any of your Merino types and MK lambs 12-17kg cwt are selling unbelievably well.”

He said the trade lambs rates were a little back this week at Forbes, but were still very strong, making up to 900c/kg. Exporters were still paying 800-850c/kg for the heavy lambs.

“It’s a really good market considering the times we are in.”

The NLRS said the supply of heavy export lambs over 30kg cwt was limited, but there was still reasonable numbers of medium and heavy weight trade lines.

All the regular buyers attended, but showed just steady interest, and the market opened cheaper before improving for the better quality types later.

Agents quoted export lambs as $10-$20 cheaper, and domestic lines varied from $10 easier to firm on a fortnight ago. Some of the strongest competition shown by processors was for lines of MK or ‘bag’ lambs weighing 14-18kg. These light weights recorded the highest carcase weight prices.

The best drafts of domestic lambs, mostly grain-assisted, sold from $180-$210 with most estimated at 780-820c/kg by agents and buyers. Some select pens of nicely-weighted trade lambs sold at higher carcase rates.

Merino lambs displaying good finish sold to $234, with most of the better quality trade pens making $160-$220, depending on size and potential skin return. Agents quoted a ballpark rate of 740c/kg for Merino lambs. Bidding for any lines of light weight lambs suiting MK processing orders was strong at $140-$170, with some buyers reporting average costs of around 950c/kg. Very small and plain lambs made $100-$130.

The sheep yarding featured some very good runs of heavy Merino wethers that sold from $170-$220. Heavy Merino ewes made $165-$246 and big crossbred ewes sold from $170-$240. Trade sheep made $135-$154. The sale was rated dearer on carcase weight rates, with most sheep making well over 700c/kg. The stronger rates were driven by a handful of mutton exporters, with other buyers only securing minimal numbers. Please note only lamb data is included in report.

Processors were active on the better lambs and feeders were strong on the secondary lambs. All the usual buyers operated in the firm market for light and trade lambs, but heavy lamb prices eased with the weaker competition. Lambs sold to restockers and feeders were firm to $2 dearer and ranged from $56-$205 for feeder lines.

The NLRS said lambs suitable for restockers and processors were well-supplied and quality was mostly good for the regular buyers attending.

Restocker lambs remained close to firm on pre-Easter levels, with light weights making $104-$163. The heavier weights made $170-$214. Well-finished lambs sold to processors and local butchers were $10-$15 cheaper in places.

Light weight ewes attracted strong restocker competition to sell to a dearer trend. Demand from processors was down, resulting in a slightly cheaper trend, due to quality and weight.

The NLRS said lamb quality was plain to very good. All the usual buyers attended and there was good competition on all trade weights, and on light lambs to fill store and MK orders.

There was not as much weight in the heavy lambs and lines over 30kg sold to $292. Agents reported light lambs going back to the paddock and MK orders as selling extremely well to be firm to slightly dearer.

The NLRS said lamb quality was described as very good, with plenty of well-finished and store lambs available.

The NLRS said lamb quality was fair to good for a smaller field of trade and processor buyers.

Sheep quality was reported to be good; however, prices eased by $5-$10. Woolly Merino wethers made to $186, light ewes sold from $100-$130 and mostly firm. Rams also remained firm at $120-$200. Please note that sales data could not be obtained for this report.

The NLRS said the mixed quality lamb offering which sold to the usual trade and processor buyers.

There was more activity from restockers this week sourcing lambs to grow on. Lambs sold firm to cheaper.

On Tuesday at the northern Tasmanian markets of Powranna and Killafaddy, the agents yarded 700 lambs, 560 more than last week, and 500 sheep, 100 more.

The NLRS the lamb market was very strong with few heavy lambs and restockers very active as the autumn shapes as one of the best for many years.