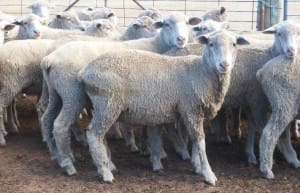 These White Suffolk cross lambs, 17.6kg cwt and mostly score 1, sold for $86 at Pomonal in Victoria on AuctionsPlus this week.

Prices for restocker, Merino and light lambs lifted the most, supported by demand for the coming Greek Easter celebrations in early May, according to the National Livestock Reporting Service.

Supermarket Coles also this week released its June lamb contracts of 580-600c/kg for 18-25kg lambs delivered to Gundagai and Brooklyn, putting a floor in forward prices.

At Hamilton in Victoria some light lambs sold up $20 higher than last week, and at Wagga in New South Wales, suitable restocker and light lambs were $6 dearer.

In New South Wales at the Central Tablelands Livestock Exchange at Carcoar on Wednesday, the agents yarded 12,025 lambs, 25 more than last week, and 5325 sheep, 825 fewer.

The NLRS said quality was plainer, with most of the lambs lacking finish. Store lambs were best supplied, followed by trade lines, some of which were in excellent condition. Heavy lambs were in limited supply. Restockers and feeder orders were active on the secondary lines.

The NLRS said lamb quality was mixed, owing to the dry seasonal conditions. Grain-fed and lambs finished on lucerne attracted the best competition, but demand was also solid for the plainer types. Not all buyers, major export or domestic processors, operated fully due to good supplies of over-the-hook lambs.

Well-finished trade lambs commanded premium prices, while drier types were also keenly sought. Generally, trade lambs were $4 dearer, mostly making 513-528c/kg. Lighter weight lambs suitable for processors restockers and feedlots sold to strong competition due to the forthcoming Greek Easter celebrations, with some sales $6 dearer. Merino trade lambs were keenly sought, with a single pen igniting the bidding at $138, and most made 457-496c/kg. Recently shorn lambs returning to the paddock sold to $108.

There were fewer heavy and extra heavy lambs, but plenty of weight and yield was offered to processors, with reasonable numbers over 30kg cwt. Heavy lambs sold from $134-$142, to average 511c/kg. Extra heavy lambs sold to stronger bidding as the sale progressed and prices lifted $7 to $140-$188.20, averaging 492c/kg.

The NLRS said the usual buyers attended, but not all operated, and they were very selective on the mixed quality offering. There were a number of pens of very good quality lambs, but the yarding dropped off into plainer and light weight lambs ideal for restockers.

The sheep were mostly average to very plain in quality, with some good lines of better covered crossbred ewes. They sold from unchanged to $2-$3 higher, especially for the more conditioned mutton.

The NLRS said lamb numbers were back as the selling season winds up and cropping program are about to start. Quality was average to good, with most of the regular buyers operating in a generally firm lamb market.

The NLRS said all categories in the mixed quality sheep and lamb yarding at Katanning sold firm, except for young Merino ewes and wethers which were $5-$10 dearer due to grazier demand.

In Queensland at the Warwick saleyards on Wednesday the agents yarded 2051 lambs and hoggets, and 629 sheep.

The market was quoted as cheaper for all descriptions in the smaller yarding of lambs and larger sheep offering.

Tasmanian restockers pay up to $112 for lambs

At the northern Tasmanian saleyards at Powranna and Killafaddy on Tuesday, agents yarded 975 lambs, 725 fewer than last week, and 900 sheep, 200 less, following the Anzac long week-end.

The NLRS said the lamb market was similar in most parts, with restockers prominently paying $70-$90 for light trade lambs, $90-$105 for medium trade lambs and up to $112 for heavy lambs.