This included a 40-cent decline for 17 micron wools, 66 cents for 18 micron and 20 cents for 19 micron. Medium Merinos and crossbred wools all posted gains of 20 to 30 cents.

Only a few growers were looking for hedging forward. Levels were in line with the expectations of the last month, with buyers looking for a slight discount forward for 18 micron and willing to give a premium to secure cover on 19 micron into the New Year.

The chart below highlights the rationale behind the current forward activity. The basis difference between 18 and 19 micron has moved above the 98th percentile, meaning that only 2pc of the time in the last twelve years has the difference exceeded 420 cents. Over the last two weeks, the difference has fallen from 426 cents to 361 cents. The forward market has been comfortable trading this difference down to 300 cents — still the 90th percentile — hence paying a premium on 19 micron, but looking at a discount for 18 micron.

We expect similar activity next week, with active bidding in the 19 micron contract flat to a slight premium throughout 2022. Demand on the 21 micron contract is less consistent leading to pricing at a modest discount to cash.

Pre-Christmas activity will likely need to be stimulated by more consistent pricing from the sell side. Offers flat to cash or at a slight premium will likely pique the interest of exporters who are battling inconsistent demand, testing logistics and volatile supply and prices. 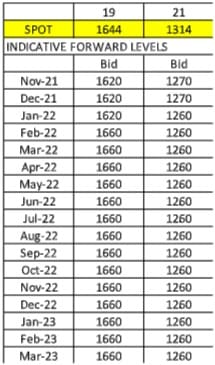