FORWARD wool trading was light as the physical auction sales made a relatively tepid after the Easter recess.

Indications from exporters are that demand signals were mixed over the break with a lack of consistent messaging. This resulted in a lacklustre opening with indicators finer than 18 microns appreciating, 18 micron levels holding steady and the coarser microns lost 30 to 40 cents.

At the stand-alone Melbourne sale on Thursday, most qualities rebounded off Wednesday’s lows.

Forwards again traded in light volumes and remain flat to cash into the season end and at a premium into the Summer and New Year.

The table below shows the change from a continual backwardation (discount) over the last four years to a profile that is flat for early maturities (0 to 60 days) and a premium as we move out to 181-365 days for this season. Premiums of 50 to 60 cents were paid into New Year this week with 19 micron trading at 1600 to 1610 cents against a closing cash around 1550 cents. Although premiums came back a little as the week closed, the 19 micron index remains bid into 2022 at 1580 cents and 21 micron at 1300 cents (cash 1247 cents). 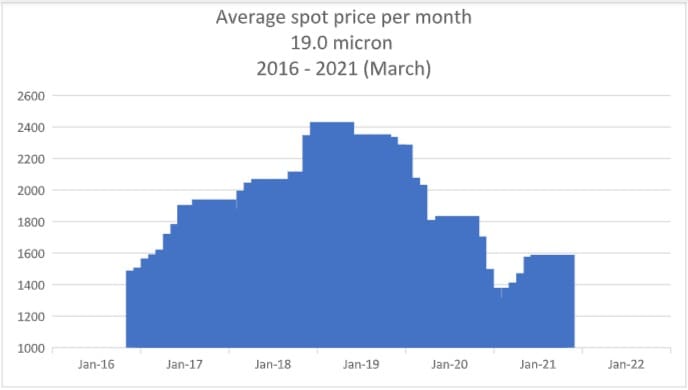 If we chart the same data and look at the average discount for each trading month, we can see how the discount represented as cents per month has tracked over the last five years. The discounts peaked as the outright price peaked and has now turned into a premium (negative discount in this chart) since October 2020 coinciding with the outright price bottoming.