Lift in wool demand coming as retailers trade up 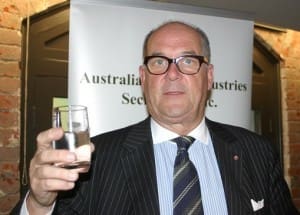 And there is potential for progress on superfine wool marketing.

The glass has to be always half-full in this industry, the president of the International Wool Textile Organisation told the annual Australian Wool Industries Secretariat’s Wool Week gathering of exporters, brokers and growers.

Mr Ackroyd said Australia’s Eastern Market Indicator was at the same point as it was at this time last year, but there is potential to change that.

“I can see that lifting, hopefully quite considerably, after we see what I expect will be a very buoyant Première Vision in Paris and a very buoyant Milano Unica in Milan.

“At these two trade fairs there will be combined around 100,000 trade buyers sampling and looking for fabrics for the northern winter-autumn 2015-2016 season,” he said.

“Retail in the Northern Hemisphere, particularly in Japan, Germany and the UK believes that there is no real future in mediocrity.”

With the polarisation of European retail at either ends of the market – specialist retailers at one end and supermarkets at the other — Mr Ackroyd said the middle players were losing market share by about two percent a quarter.

“Whereas the top end of the market is gaining with similar figures.

“The situation in the fashion business is quite similar.”

“Many in Europe, North America and indeed China and Japan would all like to shop on Savile Row, Bond Street and the better part of Collins Street here in Melbourne, Madison Avenue in New York and the Ginza in Tokyo.

And (looking) for that special product that has all the accolades of provenance, quality, authenticity and tradition.”

Conversely the lower end of the market consumers are seeking throw-away fashion, he said.

“What is happening is that the middle market is no longer content to be middle; it wants to be upper middle and it is seeking to trade up.”

Middle market players such as Next, Marks and Spencers and John Lewis in the UK, C&A in Holland and Germany, Peek and Cloppenburg in Germany, Galléries Lafayette in France and large clothing manufacturers in Japan are desperately seeking to upgrade their ranges through ingredient branding, he said.

“I expect companies like Next will significantly increase the wool content if their collections in future seasons.

“And this process will be beginning next week at the Première Vision apparel fabric fair in Paris and at the Milano Unica textile fair in Milan and will continue at Intertexile in China.”

He is sure the upgrading process will lead to an increase in demand for wool.

“This is the natural result of the four years of Campaign For Wool and it coincides nicely with economies coming out of the recession.

“There will be an increase in business in worsted weaving round the worsted spinning in China and the UK.”

Mr Ackroyd is also the vice-president of Première Vision’s strategy board, chief operations officer for Campaign for Wool and the global strategic adviser for the Woolmark Company.

“The two largest per capita wool-consuming countries in the Northern Hemisphere are coming out of the recession and are set to increase their purchase of quality products within the upper middle market.

“Within the middle market there is this absolute need to upgrade – there is no profitability in the lower middle market,” he said.

Mr Ackroyd said there was work to be done to convince specialist textile manufacturers and the trade that there was a place and a price between cashmere and lambswool for superfine Merino.

“Why in that middle area between lambswool and cashmere is there not a price for something that is far nicer than cashmere, in my view, which is far nicer than lambswool, yet because of the mentality of the buying community, does not command a price?

“It is something that we need to do something about.”

Mr Ackroyd said the “iron was hot to strike” at coming fashion events in France, Italy and China to convince fabric buyers that there is an area for superfine wool between lambswool and cashmere knitwear. The time has come to take on cashmere and show that superfine wool is better to wear, he said.

“I think certain fashion designers do not know it and have not discovered it.

“We need to be in the showrooms and the design studios of the top premium brands to show exactly how superfine wool works.”

There were also opportunities to promote wool “green” or sustainability profile to retailers and he urged his audience to be vigilant in defending wool against the synthetic fibre lobby.

Mr Ackroyd said Campaign for Wool will be focussing on promoting wool into womenswear at a series of events across Europe, in China, Japan and the Netherlands.