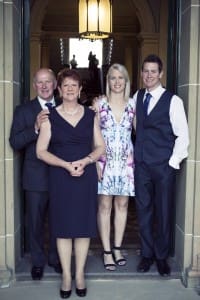 The Sandlant bale from their operation at Pyrenees Park, Lexton, was equal in micron to the NZ bale in the competition, produced by Barrie and Yvonne Payne at Visulea, but had longer and slightly stronger wool.

The ultrafine woolgrowing family, Robert and Pamela Sandlant, their son Bradley and his wife Melissa, were formally recognised by Loro Piana Group CEO, Pier Luigi Loro Piana, for producing their world-class 11 micron bale of wool at a dinner at Werribee’s The Mansion last Friday night.

With its partner Woolmark, Loro Piana annually engages Australian and New Zealand wool producers in the challenge, involving a jury organised by the Australian Superfine Wool Growers’ Association and the New Zealand Stud Merino Breeders Society. The panel selects certified bales of wool on weight, length and strength standards, to be allowed into the competition.

Robert Sandlant would not disclose the value of his winning 126kg bale, but said the wool from the family’s 10,000-11,000 ultrafine sheep flock was contracted to Loro Piana. Fairfax quoted Mr Loro Piana as saying he paid $4000 a kilogram for the bale, but Mr Sandlant told Sheep Central this was not correct.

Mr Sandlant said the dinners and ceremony associated with the challenge cup, including a flight to New Zealand, helicopter and chauffeur-driven car rides, were exciting. But at the current level of open market ultrafine prices, the family would “definitely not” have been able to continue growing the fibre if it was not selling all its wool under contract to Loro Piana.

“If you don’t have a contract you are not going to survive it,” he said.

Mr Sandlant said agents claimed there was too much superfine wool being produced and too many inferior types dragging down rates for good specification wool.

“They (Loro Piana) are setting up a line of products that they are making out of this wool – it is not all going to suiting – they are trying some different things.

“They have just released some onto the market and the CEO said it could be a couple of years before we know how it went and how it is going,” he said.

“It’s a long term thing, they haven’t got the answers yet.”

Mr Loro Piana was not available for interview by Sheep Central during his visit.