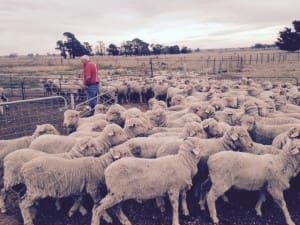 these 16kg cwt Merino lambs sold for $80 at Beaufort on AuctionsPlus this week.

Lamb buyers were able to pull saleyard rates back mid-week as yardings increased in all states this week.

Increasing weight in lambs and seasonal conditions is pushing more lambs into saleyards in all states, with processors and restockers able to discount plainer lines and secure supplies at $3-$15 less than last week.

Mutton prices were firm to dearer in most saleyards, lifting by up to $17 for heavy sheep at Wagga.

All NLRS lamb indicators head down

The National Livestock Reporting Service quoted all its Eastern States Daily Indicators as down from 3-8 cents for the lamb categories, with only the ES and national mutton rates holding ground at 368c/kg, down just one cent.

The national trade lamb indicator was down six cents to 524c/kg and the heavy indice was down seven cents to 529c/kg.

The NLRS said the mixed yarding of lambs had some good lines of trade and heavy weights, and a fair percentage of light weights. Not all the regular buyers operated in a tougher market.

Wagga’s heavy mutton lifts by up to $17

The NLRS said lamb quality was very good, with plenty of weight in the offering. Trade lambs were in reasonable supply and quality was very good, with more supplementary-fed drafts. Competition for well-finished trade lambs lacked the intensity of the previous week, while plainer lambs needing finish were keenly sought by restockers and feedlot operators. The usual contingent of domestic and export buyers were competing in a fluctuating market.

Well-finished heavy trade lambs sold to weaker demand, with major domestic processors sporadic with their purchases. Most of the heavy trade lambs eased $8 to average 536c/kg cwt. Trade lambs, 20-22kg cwt, were in limited supply and prices were generally $6 cheaper, from $110-$131. There was limited numbers of trade Merino lambs, which sold $5-$10 cheaper, making from $94-$123. Well-bred secondary lambs returning to the paddock made from $72-$114.

Mutton quality was mixed, with all weights and grades represented. Medium grades of mutton suitable for the trade were in reasonable numbers and prices were firm to $7 dearer, ranging from 396-423c/kg cwt. There were fewer heavy sheep and demand strengthened with robust competition from a major northern processor, resulting in a dearer trend of $17. Heavy sheep made from $105-$132. The smaller offering of medium and heavy Merino wethers sold from $90-$126, to average 413c/kg.

The NLRS said lamb quality increased, with many lines in the medium weight range. All the regular buyers were present, plus an export processor. Store buyers took the opportunity to purchase unfinished lambs.

The NLRS said most of the trade weight and heavy lambs were of good quality. Most of the usual buyers operated in a cheaper market, with lambs generally selling $2-$8 cheaper.

Extra heavy export lambs reached a market top of $179. Buyers were more selective and the plainer trade weight lambs were not as keenly sought. Merino lambs in near full wool sold to $115. Restocking activity was limited, with the few lots selling from $82-$105.

The NLRS said the push to turn-off sheep and lambs precedes forthcoming seeding programs. It was a fair to average quality yarding, mainly comprising mutton and store lambs, along with several drafts of well-finished light heavy and trade lambs.

Competition was solid from a full field of buyers, with prices generally firm to slightly dearer on most types. Air freight lambs were the most keenly sought after and sold a good $5 dearer. The very light store lambs were mostly Merinos that made $18-$60 to restockers and feeders. Air freight lambs, 15-18kg cwt, made from $60-$98, to be $8 dearer. Trade lambs, 18-22kg, were up $5, with most making $76-$126. The heavy lambs were firm to slightly easier and sold to a top of $125.