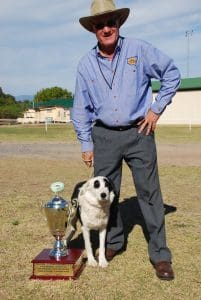 ONE of the last acts of legendary Australian sheep dog trialler Greg Prince was to find homes for his remaining 13 dogs.

He didn’t want to sell his sheep dogs, so homes were found for them with friends in Victoria and New South Wales.

“He placed them with people they matched,” Mr Prince’s wife Jan said.

Australia lost one of its greatest sheep dog triallers and mentors with the passing of the New South Wales sheep dog trainer, trialler and mentor aged 73 at the weekend.

He also represented New South Wales several times and won every state championship at least once, apart from the Tasmanian title, because he didn’t like boats, according to SA Working Sheepdog Association treasurer Simone Cross.

He won his last supreme in 2013 in Warwick, Queensland and represented New South Wales for the last time at Seymour in Victoria in October last year.

Mr Prince died early Saturday morning after being diagnosed with cancer in June last year and is survived by his wife Jan and sons Bob, Brad and Greg and their families. His passing has prompted numerous comments from sheep dog enthusiasts across Australia on his Facebook page and those of the NSW Sheepdog Workers and the SA Working Sheepdog Association.

Mrs Prince said her husband competed in his first trial at Murrurundi in New South Wales in the late 80s and his dogs were his life.

“I reckon he might have been a bit half-dog myself.”

For the past 25 years, the couple conducted up to 22 working dog schools across Australia and Mr Prince competed in about 10 trials annually. He first worked dogs as a boy on the family sheep property near Cobar and his trialling career spanned about 30 years.

Mrs Cross said in a Facebook post that Mr Prince was “truly a legend in the sport of sheep dog trialling.”

“He represented Australia both as a worker and as a judge-manager, and was a fierce competitor.

“His name is well known all around Australia for the working dog schools that he ran. His techniques are used today all over Australia,” she said.

“He will be sorely missed. Our love and deepest sympathy is extended to Jan and their family.”

NSW trialler Alison Burrell said Greg Prince would be the most successful trialler Australia had ever seen.

In a NSW SheepDog Workers facebook post, Ms Burrell extended her condolences to the Prince family and said Mr Prince was the most influential dog trialler the country has seen.

“Greg was not only an outstanding dog trialler, he was also a gentleman, friend, teacher, role model and an inspiration to many people in many areas.

“His name will forever be remembered among the working dog community all over the country and will be written in many record books forever. RIP Greg Prince.” 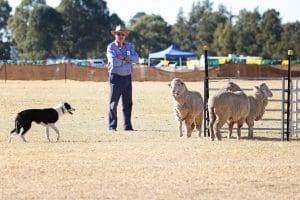 Greg Prince and friend about to pen up. Photo – Sydney Sheepdog club 2016

“He’s got to be the king of Australia in dog trialling I would say.”

“He lifted sheep dog trialling to another level.”

Mrs Prince said her husband enjoyed the many phone calls, emails and visits in Dubbo from sheep dog people from across Australia in the last six months.

A private family funeral will be held for Mr Prince on Friday.