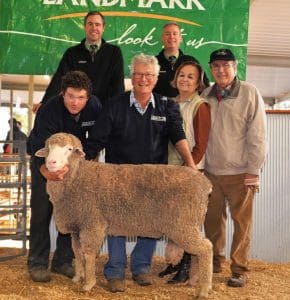 With the $10,000 at the Leahcim Poll Merino ram sale are Landmark auctioneers Richard Miller and Gordon Wood, and in thr front, from left, Alistair and Andrew Michael, and purchasers, Ada and Pepe Marin, Punta Arenas, Chile.

The Michael family with selling agents Landmark sold all 228 rams offered for $2733, $18 up on last year. The family added 28 more rams to the original 200 catalogued just before the sale.

Chilean buyer Pepe Marin, Ganadera Marin, Punta Arenas paid the top price of $10,000 top price for lot 2, L152719, a 15 month old youngster with great structure and type, backed up by an outstanding set of performance figures. These were a catalogue leading +28.8 for yearling clean fleece weight, the third best +18.2 for staple length, plus a very high +8.8 for yearling weight.

Mr Marin then backed up the top purchase with two more rams at $5800 and $6000, both with top end for performance figures. The Marin flock has been using Leahcim genetics since 1997 and has an influence on 50pc of Chile’s sheep flock. Including the Chilean purchases, 29 rams sold to 12 stud ram breeding flocks and averaged $4459.

The second top price of $7000 was paid by Paul and Jen Goerling, Lukin Springs stud, Boyup Brook, who paid an average of $6300 for two rams.

Western Australia’s Welke family stud, Westwood from Cascade, bid through Classings Bill Walker to pay $5200 for L152316 and the Pengilly family, Penrose Pastoral, Esperence bought five rams to $3400 and at a $2700 average.

Commercial WA producers, the Foss family from Bruce Rock and represented by Phil Foss paid to $3000 for nine rams, averaging $2256.

Buying through the WISS agency in Melbourne, Ardenside Angus, Tooma, NSW, bought seven rams to $4000 and at a $3371 average, and the Mumblebone Merino stud, Mumblebone, NSW,  paid $4000 for a ram.