Landmark’s Matt Thomas is Wool Broker of the Year 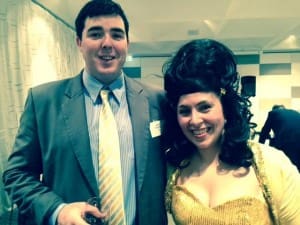 LANDMARK’S Matt Thomas has won Australia’s 2015 National Wool Broker of the Year award, recognising his rise through the ranks to become north-east technical manager and senior Sydney auctioneer for the company.

The 32-year-old’s win gives him an all-expenses paid trip to the International Wool Textile Organisation’s 2016 Congress in Sydney in April next year, and to the Nanjing Wool Market Conference and to Chinese mills next year.

Matt has been a wool broker with Landmark for nine years, the last two in Sydney and Newcastle.

“I started in the Brisbane wool store in 2006, moved to Goondiwindi and look after all the Queensland wool.”

He then moved to take over the management of the Newcastle stores in 2011 until they closed in 2013.

“I grew up there and graduated from high school and spent seven years shearing.

“You see the industry from both sides which is good.”

Matt said he had been selling wool for five years in Sydney and enjoyed auctioneering the most.

All finalists recognised for their skills 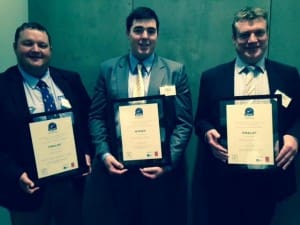 Mr Merriman commended the finalists for their skills, including Andrew Howell’s involvement with the Balmoral Sire Evaluation Trials and Todd Clark’s array of skills in wool and agency work.

Matt’s presentation was regarded as outstanding by the panel and he was also commended for his management of wool in the Landmark’s Newcastle when floodwaters hit earlier this year.

Matt was in charge of Landmark’s Newcastle wool stores when 320mm of rain hit the Newcastle-Hunter region in 24 hours in April, flooding a large area.

“Flood water and storm waters went through the wool store at varying depths from 5-35 centimetres, so we transported nearly 500 bales to Brisbane to try to dry them.

“Because of the high levels of moisture in Newcastle none of the wools were drying properly.”

Then the wool had to be re-tested and re-sorted.

“It was bloody big job.

“At on stage, I had a spreadsheet with 2100 separate lines.”

Matt and his team did such a good job they have been able to possibly eliminate any exporter claims as a result of the incident.

“I dealt with it as if it was my wool — what would I do to get the best possible result.”

“We moved the wool quickly and no-one else moved their wool to another location to get it dry,” he said.

“We opened 480 bales, pulled off the damaged part, dried it, rebaled the good wool, recored and retested it and then paid the grower out for the kilograms that were damaged.

“One of the biggest things was to remove any doubts by the exporters,” Matt said.

“If we want full competition on our catalogues then you’ve got put in the effort to make sure they have no doubts about what they are buying.

“It was good experience but I wouldn’t want to go through it again.”