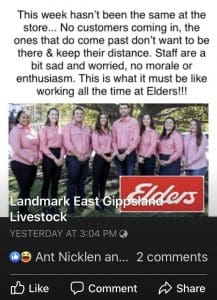 A FACEBOOK post by a Gippsland Nutrien Ag Solutions franchise referring to Elders staff has been removed after attracting wide criticism on the social media platform.

Landmark East Gippsland Livestock agent Brad Obst has apologised for his post earlier this week that included a photo of some Elders trainees and comments on the state of business at the agency’s Bairnsdale store during the COVID pandemic.

“This week hasn’t been the same at the store… No customers coming, the ones that do come past don’t want to be there & keep their distance.

“Staff are a bit sad and worried, no morale or enthusiasm.

Sheep Central has been told the post went up at around 3pm on Monday and was taken down within hours. However, not before it attracted several critical comments and was referred to by Elders general manager rural supplies Richard Norton on his Facebook site.

Nutrien Ag Solutions managing director Rob Clayton said the company did not condone the Facebook post in any way.

“As soon as management became aware of it, it was taken down immediately and the business in question spoken with by me.

“I also spoke directly with Elders CEO Mark Allison this morning (Tuesday), apologised for the post, and reiterated that it was not something I, or the business, endorsed and confirmed that it had been removed as soon as management became aware of it,” Mr Clayton said.

“In what was an amicable conversation, we spoke of the need for agriculture to work together to support our people and Australian farmers through these difficult times.” 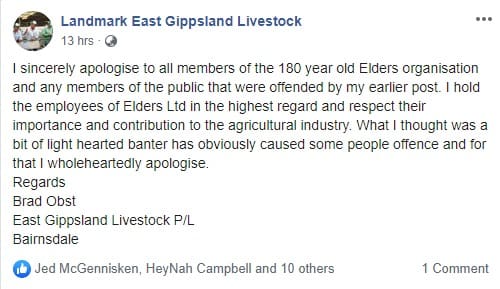 “I hold the employees of Elders Ltd in the highest regard and respect their importance and contribution to the agricultural industry,” he said.

“What I thought was a bit of light hearted banter has obviously caused some people offence and for that I wholeheartedly apologise.”

Mr Norton said Elders staff are doing everything they can to support rural and regional Australia through the COVID-19 crisis, but many were upset by the Facebook post.

“When anyone, opposition or anyone else compares our business to a virus, it is really distressing for our staff, and that’s who I feel for from this post, the Elders staff.

“Clearly, there has been a bit of effort gone into the post, because they are all our trainees in that photo.”

He said staff started sending it to him on Monday night.

“They are pretty upset about it, and with tens of thousands of people dying around the world, and for anyone to take advantage of that is really distressing to our staff.”