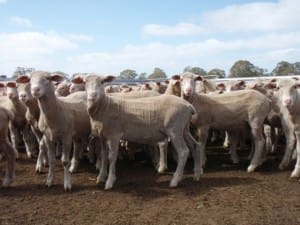 These shorn White Suffolk cross lambs, 15.2kg cwt, from Edenhope sold for $83.50 on AuctionsPlus on Thursday.

Quality mutton and lambs struggled to maintain firm rates at saleyards mid-week as more numbers hit markets, were sold on farm or over the hooks.

Well-finished trade and heavy weight new season lambs, and Merino lambs, were the least influenced by the increased numbers at most saleyards, with processors and restockers on the light lambs helping them hold their values.

Heavy sheep also fared the best of the mutton categories in most markets, but buyers had increased supplies to pick from in some saleyards as producers opted to sell earlier due to the drying season and unattractive skin prices.

The National Livestock Reporting Service said the Eastern States Trade Lamb Indicator finished on Thursday at 471c/kg, down three cents and the heavy lamb indicator was unchanged at 472c/kg. The mutton indicator lost four cents to end at 314c/kg.

Landmark livestock manager at Wagga Peter Cabot said in the last six weeks Wagga has had an outstanding run of lambs on the back of a very good season, though it is starting to falter now.

“Right the way through these lambs have had a terrific run and we are selling a lot of lambs that aren’t normally sold at this time of the year after a terrific autumn break and a reasonably wet winter.”

“It is at good rates, everyone is pretty happy with where it is at for this time of year,” he said.

“We usually cop a bit of a smash in the middle of September, where it drops $10-$20, well that hasn’t happened this year apart from one market that was a bit cheaper, then it was dearer the next week.”

Mr Cabot said the country west of Wagga was pretty close to being finished.

“All the country around Hay has gone, when it doesn’t normally go until November, but the rest around Wagga is in pretty good stead.

“A lot of the older cockies reckon it was the better autumn they’ve ever had.”

Horsham Stock Agents Association president Andrew Adamson said with little pasture available in his area and farmers waiting on rain to finish crops, producers were turning off lambs and cull ewes as soon as possible.

“Better quality lambs are going to be increasingly hard to find, though we had a pretty good yarding here on Wednesday.

“But the whole market is coming down and that would be supply-driven.”

There were more lambs starting to come into saleyards and being sold over the hooks across Victoria and southern areas. More sheep were coming into markets because of the good prices and seasonal conditions, he said.

“We’ve had some pretty good sheep numbers for the last 2-3 months.

“People are off-loading sooner rather than later because of the seasonal conditions,” he said.

“Shorn sheep that normally might get held through till November or December to get some skin back on them are being sold because the skin is not worth anything.

“People are sending them straight off the board or a week off the board because there is no point in keeping them to put a skin back on them.”

Heavy lamb prices up $3-$4 at Carcoar

The National Livestock Reporting Service said lamb quality was not to the standard offered at the previous market. Young lambs were well-supplied, but the older lambs with wool were showing dryness in the skins. The usual buyers competed in a market that showed variable trends.

The older lambs struggled to remain firm and the trade weights sold from $89-$100. The heavier lambs reached $140. The Merino lambs also struggled to maintain firm prices.

The NLRS said there was a larger run of well-conditioned new season lambs along with a good selection of shorn old lambs. Many were off crops, and showing good weight and condition.

With a few extra butcher orders operating, most categories were firm to dearer. Light weight new season lambs up to 18kg cwt ranged from $55-$97 while trade weights, including a few to restockers, made $90-$108. Heavy and extra heavy weight new season lambs ranged from $108-$128, to average 460c/kg-490c/kg cwt. In the old lamb section, there were a few more Merinos and these ranged from $69-$88 for light processing and trade weights. Second cross trade weight old lambs made $84-$104, while extra heavy weights reached $120, for most to be around 400c/kg-450c/kg cwt.

There were increased numbers of off-shears Merino wethers along with the usual mix of mostly Merino ewes. Competition was stronger and prices were mostly $5-$7 dearer. Medium and heavy ewes made $58-$91, while Merino wethers sold to $92 and heavy crossbred wethers reached $120. Most mutton averaged 290c/kg-335c/kg cwt.

The NLRS said new season lambs made up most of the offering. New season lamb quality was excellent, with plenty of young lambs above 23kg cwt. Old lambs were in shorter supply and quality was plainer. All the domestic buyers attended, though some didn’t operate, including one supermarket. Export processors were subdued, with prices easing over all heavy categories.

More lambs suitable to turn-out were offered and sold to steady demand from a larger group of buyers. Store orders came from Goulburn, Bendigo, Yarrawonga and Corowa, as well as the local area. The better quality second cross lambs returning to the paddock sold from $74-$88.

Mutton quality was quite good, with heavy sheep well-represented. Merino ewes suitable for the trade were in reasonable supply and sold to a smaller group of buyers, with prices easing $4 to average 321c/kg cwt. Heavy sheep were in good numbers and bidding was strongest from northern exporters for heavy Merino wethers, with prices generally firm to $2 cheaper and averaging 340c/kg cwt. Heavy crossbred ewes were well-supplied and sold from $85-$105.60, while Merino wethers made from $82-$108.

Landmark livestock manager at Wagga Peter Cabot considered the lamb market to be fully firm this week, considering the numbers yarded, the few exporters in the market and the public holiday on Monday.

“I didn’t think the exporters were subdued.

“I just think the extra lambs probably meant they were probably not operating with the urgency that they were in the couple of weeks before,” he said.

The NLRS said lamb quality was average to good with all weights and grades offered. Most of the regular buyers operated in a slightly easier market, with most lambs selling $2-$5 easier. As the market progressed the better-presented trade weight lambs sold to steady competition, to be mostly firm on last week and making around 480c/kg cwt. Restockers from Kaniva, Shepparton, Ballarat and local areas paid from $79.50-$89. The best of the few old lambs sold from $95-$130.50, with heavy hoggets making $65-$90.

The sheep offering included many good runs of recently shorn Merino ewes and wethers. Quality was good but not all the usual buyers were present or operated fully. Light and medium sheep sold mostly firm, with the heavier Merino and crossbred ewes selling $2-$3 easier. Heavy Merino wethers sold from $73-$89, to be unchanged.

“The better quality lambs are holding their own.”

Grass seed in lamb skins was not an issue and he didn’t expect much pasture hay to be cut in the area.

“The grass is not high enough for seed to get into the lambs – there is very limited feed around Horsham.”

Not many farmers have put lambs into crops, while they wait to see what yields will be, he said.

“If we don’t get rain and the crops fail I don’t they will be too keen to put the sheep in, because the country will blow.

“Most of the crops are still holding on, some have been cut for hay.”

Lighter sheep were noticeably cheaper this week because there were a few buyers not operating after filling orders, he said.

“The better quality Merino sheep are holding their value – the exporters are still pretty keen to get them.”

The NLRS said there was a small and ordinary offering of old lambs, but a reasonable selection of sheep. The usual buyers operated for this quiet time of year in the south-west. The limited number of lambs, and plain quality, meant an accurate price trend couldn’t be generated. First cross ewes in the mutton yarding, however, were cheaper by up to $10.

Lambs sold to a top of $111 for a pen of better conditioned trade weights in a short skin. It was one of only two sales over $100. The balance of the lambs were very mixed and sold from $38-$88, averaging an estimated 380c/kg cwt, with only the few better quality pens trending above 400c/kg cwt.

First cross ewes were cheaper, with the heavyweights averaging $10 less at $70-$82, at around 240c/kg-250c/kg cwt. Light and plainer conditioned crossbred ewes were also cheaper at $48-$67. The good quality Merino sheep received better competition, with the lead pens of heavy and recently shorn wethers selling from $70-$85, at around 300c/kg-320c/kg cwt. The Merino wethers were mostly firm to a few dollars dearer in places compared to the previous week. The best pens of Merino ewes sold from $66-$73, while plainer and light weight ewes made from $37-$60.

The NLRS said ewe mutton weight and quality was good with many heavy weights offered. Lamb supply was moderate and mostly new season drafts, with some prime trade lambs. Wether and hogget numbers were limited. Competition for ewes remained similar. However there was only one lamb processor operating, and store and light lamb buyers were cautious resulting in price reductions.

Merino ewe hogget quality was plainer with limited sales to restockers. Better drafts made $55-$77 with plain sales from $35-$50.

Wether sales eased without live export competition. Heavy weight sales were between $75-$88.50, back $4 to processors with lighter and store sales to feeders and restockers also selling easier, from $48-$75. Rams were also marginally easier with ram lambs to $70.50 and young drafts to export feeders sold from $30-$71. Old rams to processors made $5-$35.