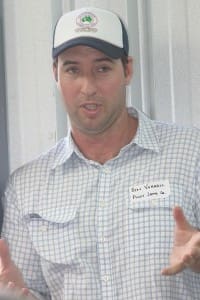 Competition is expected to intensify between exporters and domestic buyers for quality trade and heavy lambs, but opinions are divided on where prices will go in the New Year.

He had expected some of his suppliers to contract at least some of their February turn-off at a 500c/kg cwt forward price he had floated, but had received little interest.

“I’m filling that now, but I can’t understand why a lot of people aren’t taking a portion at 500c/kg when there is money to be made to take away the risk.

“If the dollar goes back to 90 US cents then the price is going to drop.”

Mr Verrall said Australia’s lamb kill rates were already about 30pc above the final 2013 level and lambs were going into importers’ freezers.

“The market overseas is a little bit overloaded; it is getting stored in freezers around the world,” he said.

“So we can only kill them once as everyone knows so that is sort of telling me, and you can work it out for yourselves that next year there is going to be a shortfall.

“By feeding lambs, putting them on and stretching them out, there is going to be a return there,” Mr Verrall said.

Though in the current market and return situation, 550c/kg “doesn’t work” and allow ALC a margin, he said.

Mr Verrall said exporters had been getting resistance from overseas importers prior to current lamb prices and the export market worked on a three-month-cycle of price to shipment.

“They’ve got no interest in price rises.”

When asked about speculation by competitor Thomas Foods International that lamb prices might exceed the 600c/kg mark early next year, Mr Verrall joked “we’ll sell our lambs to them”.

He hoped a price spike to 600c/kg next year — as has happened before in Australia — did not happen.

“That was a disaster for everybody because whoever was selling in that period copped it later, because it averaged out.”

“A 15 cent movement year-to-year has really lifted our ability to pay a bit more in January next year.

“Not only is in meat, but it is skins as well, everything is traded in US dollars.”

Mr Verrall said he expected the lamb market to be very firm and competitive in the New Year.

“I think it is going to well worth their while to shear lambs and feeding them on or buying in stores.”

He told producers at the Mortlake field day to get their lambs to 18 kg-plus to have export and trade selling options.

Exporter and domestic competition to increase

TB White and Sons principal at Ballarat Gerard White said he was expecting domestic supermarket buyers – Coles and Woolworths – to start to push export buyers on good lambs because fewer quality lambs with weight will be available.

“They won’t back off because they have got to have lambs.”

Mr White expected carcase weight prices to reach 600c/kg by February, due to the lower numbers of lambs that have gone back to grass in his area this year and the low Australian dollar.

“While the lambs are dearer it wouldn’t be hurting exporters as much you would think.

“It is not breaking new ground and they can buy them at that money.”

Thomas Foods International national livestock manager for sheep and lambs Paul Leonard said the supply situation for 18-24kg lambs was very tight and he expected there would be a shortfall of quality lambs for export and domestic markets after January next year.

“Yes, for some, we have 70pc of our kill bought for January and February.”

He said exporters were already competing against domestic buyers for quality lambs.

Most years TFI would look to contract lambs for June and July supply, but this was not guaranteed, he said.

Mr Leonard said TFI was not currently considering contracting lamb supply after January next year, but would look at this in February-March and it would depend on the currency, global demand and seasonality outlook.

“I believe there are substantial numbers of store lambs that have gone out on feed right across the eastern states over the past two months and continuing now.

“Therefore all things being equal, we should see a consistent supply of shorn, grain-assisted lambs through from mid-February until at least May,” he said.

“After May could be another story with lambs very difficult to produce until the new seasons start again in August 2015…all depending on how early a break we do or don’t receive.”