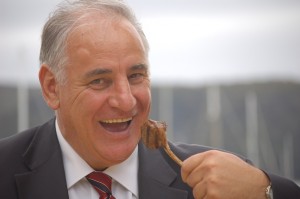 Mr Kekovich is the most recently announced presenter at the conference, which will run from August 10-12 in Albury New South Wales

He is renowned for his love of lamb and will celebrate all things lamb with delegates at the GrandsLamb dinner on Thursday, August 11, which will feature a delicious lamb-themed menu with NSW wines.

LambEx 2016 chairman Rodney Watt said it was exciting to have Mr Kekovich at the event.

“I’m sure there will be plenty of people who want to ‘chew the fat’, so to speak, with Sam Kekovich,” he said.

“He’s been a wonderful ambassador for the lamb industry.

“We’re pleased to be able to welcome him to LambEx so he can share some insights on his career as Australia’s Lambassador and the best ways to spruik lamb.”

Lamb producers are being encouraged to book before registrations for the conference close on Friday, July 29, 2016.

“LambEx 2016 is the flagship event for the sheep and lamb industry. It is only the fourth time it has been held and the first time in New South Wales.

“We are encouraging as many producers as possible to attend. If you miss out this time, it will be a long two years before the next event,” Mr Watt said.