Lamb supply to tighten at end of spring – ABARES

Lamb supply is expected to tighten toward the end of spring, with the number of spring lambs sold in 2014–15 forecast to fall compared to the same period a year ago. 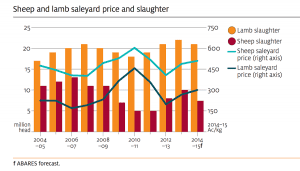 “The Australian weighted average saleyard price of lamb is forecast to increase by around 7 per cent in 2014–15 to around 510 cents a kilogram.

“The weighted average saleyard price for sheep is forecast to increase by around 15 per cent in 2014–15 to 300 cents a kilogram,” he said.

The sheep price forecast comes after a 40 per cent increase in 2013–14, resulting from strong demand for mutton in Asia.

The higher number of sheep slaughtered in the previous two seasons is estimated to have resulted in a smaller breeding flock. 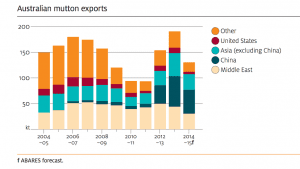 Mr Leith said export demand for sheep meat is expected to be strong in 2014–15, following a record year for lamb exports and considerable growth in mutton exports in 2013–14.

Australia exported a record 226 000 tonnes of lamb in 2013–14 as shipments increased to China, the Middle East and the United States.

Australia exported a record 226, 000 tonnes of lamb in 2013–14 as shipments increased to China, the Middle East and the United States. 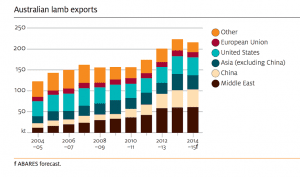 “The forecast decline in exports represents a decrease in lamb supply, although strong demand from major export destinations is expected to continue.

“Reflecting this, the value of lamb exports is forecast to increase by 2pc to $1.5 billion. In 2013–14 the Middle East, China and the United States accounted for almost two-thirds of Australian lamb exports,” Mr Leith said.