Heavy lamb shortage raises price record to $301.20, but will a new definition help? 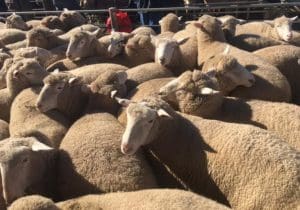 A new national record of $301.20 was achieved at Wagga Wagga yesterday by agents GJ Hulm & Co for 100 lambs from Berridale producer Doug Constance estimated to have a carcase weight of 42kg and a skin value of $10-$12, giving a cwt value of about 700c/kg.

Heavy lamb finishers have in recent weeks been running the annual gauntlet of lambs erupting incisors and risking a price discount as hoggets under Australia’s current lamb definition.

Processors are reportedly “doing margins” on heavy trade and export lambs at the current rates of 750-900c/kg-plus carcase weight to meet their global customer commitments and slaughter chains running until sufficient new season drafts with weight hit the market, possibly in September.

In New Zealand, Australia’s main lamb competitor globally, lambs are already defined as young sheep up to 12 months old with no incisor in wear.

“It allows us to compete on a level playing field both domestically and globally,” Mr Leonard said.

“For those reasons, the sooner it is implemented the better for the industry.

“It’s a win-win for producers and processors.”

Mr Leonard said the new lamb definition might allow a small percentage of more older lambs to be sold as lambs by producers.

“Particularly with more producers supplementary feeding lambs, and especially in these dry times, more people grain feeding lambs, which would allow us to have prime lambs to process, which otherwise we wouldn’t have in this current environment.”

Mr Leonard did not think having the new lamb definition in play would mean a significant number of lambs would then be available.

“If it comes in the big winner will be the producers.

“It’s not like suddenly all the hoggets can be killed as lambs – it’s only going to apply to those marginal lambs that are right on 12 months, so I don’t think it is going to be a solution from a supply perspective,” he said.

“I don’t think it is going to make a major difference, but it is certainly going to protect mainly the producers.”

Producers feeding lambs on were getting penalised more than anyone else under the current Australian lamb definition, he said.

At Tuesday at Dublin’s South Australian Livestock Exchange, TFI bought 150 lambs for $202, but when the seller’s agent mouthed them, there were 38 that had erupted permanent incisors, which sold for a $50 discount when later sold as hoggets. The lambs had apparently been mouthed a few days before the sale.

“At this time of the year in particular, it is well-raised, this is certainly a period of time when we are starting to see more and hoggets coming through and we’re mouthing all our saleyard lines to identify hoggets in lamb sale lots.

He said once the new lamb definition is implemented it will protect primary producers and encourage grain-assisted lamb production.

Hogget prices are running at about 400c/kg cwt and extra heavy lambs are consistently selling at 750-800c/kg.

Sheep Producers Australia has estimated the proposed new lamb definition change will not be implemented until spring next year.