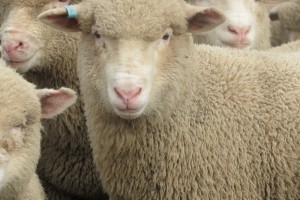 Mutton sheep prices are also predicted to increase by 6pc to average 440c/kg in response to firm export demand and continued flock rebuilding.

Lamb and sheep slaughter to increase 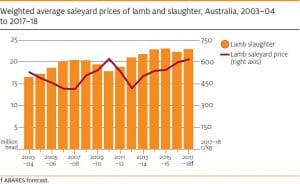 ABARES is expecting lamb slaughter to increase by 3pc to 23 million head, reflecting increased lamb markings and higher turn-off. Lamb production is forecast to lift 2pc to 518,000 tonnes for the year. The forecast increase in slaughter is expected to be partially offset by an expected fall in carcase weights, Mr Berry said.

ABARES is forecasting lamb export volumes in 201-18 to increase by about 2pc to 259,000 tonnes and the value of exports is forecast to be up by 7pc to $2.1 billion, driven by growth into the United States, China and Middle Eastern countries. Increased Australian exports to these destinations will be aided by a forecast continuation of lower exports from New Zealand, Australia’s main competitor in global markets, Mr Berry said.

Wool indicator and exports to lift 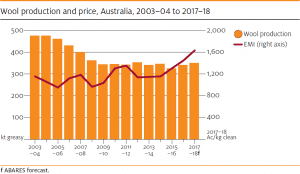 Mr Berry said in 2017–18 the AWEX Eastern Market Indicator for wool is forecast to rise by 15pc to average 1630c/kg clean.

“A higher EMI is expected to be supported by higher prices for fine and superfine wools.

“This reflects strong growth in global demand for woollen textiles and apparel relative to growth in the supply of fine wool used in the manufacture of these items,” he said.

“These factors drove the EMI to a record high of 1683 cents per kilogram in November.”

ABARES is forecasting the national flock to increase by 3pc to around 73 million head by the end of June 2018.

The commodity forecaster is assuming average seasonal conditions over the remainder of 2017–18, with pasture growth forecast to improve but remain less favourable than in 2016–17.

“This is expected to slow the rate of turn-off and slaughter, and drive continued, though slower, flock rebuilding,” Mr Berry said.

Mr Berry said a return to widespread dry conditions through winter and early spring 2017 slowed flock rebuilding and drove higher rates of turn-off and slaughter. In the first three months of 2017–18 turn-off through saleyards increased by 17pc for lambs and 29p for sheep, compared with the same period in 2016. However, a 7pc lift in lamb slaughter and a 26pc rise in the sheep kill did not keep pace with turn-off over the same period.

“This suggests that significant numbers of sheep and lambs have been purchased for flock expansion rather than meat production.

Live sheep exports are expected to grow only slightly to around 1.9 million head, with growth constrained by continued flock rebuilding, limiting the availability of suitable sheep. The Middle East accounts for around 97pc of Australia’s live exports and assumed higher oil prices are likely to support demand, ABARES said.

ABARES said poor climate conditions in grain-growing regions have contributed to the gross value of farm production being forecast to reach $59 billion in 2017-18, down 7pc from a record of $63 billion in 2016-17.

“This follows an estimated 12 per cent increase in 2016–17 when our winter crops delivered exceptional yields and prices for livestock and wool were quite favourable.

“Despite the decline, gross value of farm production would still be higher than the average of $55 billion over the past five years,” Dr Hatfield-Dodds said.

“This forecast reduction is likely to lead to a decline of around 3pc in export earnings, to $47 billion in 2017-18.

“Export earnings are forecast to increase for livestock and livestock products and also cotton and wine.

“The report shows prices of livestock products are expected to be more favourable in 2017-18, in line with rising demand for sheep meat, wool and dairy.

Click here to view the full ABARES report, or here for a version with lower resolution images.

Click here for an infographic of the 2017-18 livestock and crop forecasts.