Lamb sellers head for the hooks as saleyard rates disappoint 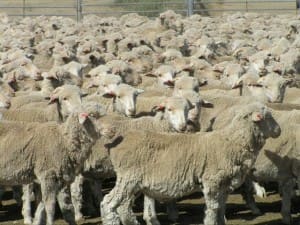 Trade lamb prices were firm to slightly dearer in most eastern states saleyards and over-the-hooks mid-week as processors secured supplies for the Easter period.

But export lamb saleyard rates fluctuated from lower, to barely firm or slightly higher depending on quality, numbers offered and location.

However, the overall quality slaughter lamb supply situation in the eastern states was best illustrated by selective bidding by processors at major markets and the quick reaction to Coles last week releasing a 580c/kg contract for May delivery.

Coles on Friday released a May delivery contract of 580c/kg for 18-25kg lambs, but a quick uptake meant the first three weeks of the contract’s requirement was filled by Monday.

Agents look for hook sales after price drops in Victoria

“It gave us confidence to put a few in and consequently we got a kick in the guts, so no more yards for a while.

“There are simply too many lambs about and we are just playing it safe and basically hooking everything,” he said.

“Last week was a surprise, but you get one positive week and you think you are right, but it’s not the case.

“And as they (the processors) originally all told us is going to be mid-April before the smoke clears and possibly even the end of April.”

Mr McConachy said the processors did have plenty of lambs around them and there were delays of 2-3 weeks to get kill space for consignments in some cases.

“They are telling us there are lambs everywhere and just in our little neighbourhood that’s probably right.

“We got a lot of lambs up our sleeves to hook over April and even beyond.”

“There were a lot of lambs yesterday were making between 450-480c/kg.”

There were still relatively good spot hook rates available, with Westside on 550c/kg, Safeway on 540c/kg, Coles 550c/kg and the Australian Lamb Company has come back to 520c/kg for its heavy export lambs, he said.

After Tuesday’s saleyard sales, the Meat and Livestock Australia’s National Livestock Reporting Service quoted the Eastern States Daily Indicator for trade lambs as firm on 526c/kg, but the heavy lamb indice lost six cents to close on 524c/kg. The other lamb ESDIs are: restocker 522c/kg, down 7 cents; Merino 458c/kg, down 10c; light 495c/kg, up 3c. The national trade lamb indicator is on 527c/kg and the heavy indice closed on 523c/kg.

The ESDI for mutton finished firm on 339c/kg and the national indice is on 338c/kg.

In NSW, the NLRS said over-the-hook lamb rates lifted across all categories in anticipation of the two short weeks due to the four-day Easter break.

In WA, the NLRS quoted over-the-hook rates for lambs as unchanged, but mutton prices lifted 28-35c/kg this week.

Tasmania’s over-the-hook rates for mutton and lamb were left unchanged this week, according to the NLRS.

Meat and Livestock Australia did not update South Australia’s sheep and lamb over-the-hook rates due to a lack of contributors.

The NLRS said with the weather remaining dry and no market until after the Easter break, numbers lifted and quality remained very mixed. There were more plainer lightweight lambs, with good runs of heavy weight lambs, but a limited supply of ideal trade weights. The Dorper and Dorper crosses were well-supplied and the usual buyers competed in a generally dearer market.

The NLRS said the quality of the lamb offering was mixed, but there was a good supply of well-finished trade and heavy lambs. There were also some very good quality and condition medium and heavy weight sheep penned. The usual buyers attended, along with the return of one after a prolonged absence.

Dearer trends were seen in the lamb market, with trade weight prices up $2-$6, mostly for the heavier trade weights. Prices for heavy lambs over 24kg cwt improved the most, with average prices $8-$9 dearer.

The market trend for sheep was also generally dearer, with the quality of the heavy Merino wethers contributing to a significant lift in prices.

The NLRS said lamb quality was mixed. Heavy and extra heavy lambs were very well-supplied and there were more light store lambs. Trade weights were limited. All the usual buyers attended and the heavy weights sold to a cheaper trend, whereas the trade weights remained firm.

Light lambs sold to a dearer trend as restocker activity picked up. Restocking lambs sold from $60-$102 and Merino lambs made $28-$61. Trade weight lambs were unchanged with medium and heavy weights receiving $96-$126.

The NLRS said there was a better selection of heavy export lambs, while the quality of the trade and lightweight lambs remained mixed. The usual buyers operated, but were selective with their bidding and prices fluctuated depending on breed quality and finish.

In dollar per head terms most heavy slaughter lambs made similar money to last week, but due to extra weight, carcase values were sometimes lower. The market reached a top of $175.60 for a pen of extra heavy export lambs estimated at 33-34kg cwt – the only sale over $170. A pen of 11 lambs donated to charity for the Royal Children’s Hospital Good Friday Appeal sold to several processors for $360 each.

The market showed the most variance on light weight lambs under 20kg cwt. Lambs weighing 14-18kg cwt with good shape and finish sold to strong demand from buyers, filling specialist orders for the Greek Easter trade. These lambs were significantly dearer at $90-$110. Any plainly bred light lambs, lacking finish, were often a few dollars cheaper, ranging from $52-$86.

There was restocking orders from Echuca, Shepparton and the local area, and store lambs also recorded mixed results depending on quality and size. The best pens of heavy domestic lambs sold similar to last week at $125-$138, averaging around 530-540c/kg cwt, with odd sales dearer. The general run of trade lambs, 20-22kg cwt, mostly made from $100-$116.

The mutton sale was cheaper, with very light and plain sheep the most affected. Heavy slaughter sheep averaged $3-$6 easier, while lightweight types lost $7-$16 in places. Bidding for rams was also very lacklustre. Heavy first-cross ewes sold from $92-$117, while the best Merino ewes in high value skins returned up to $115. The lead pens of Merino wethers sold from $82-$103. Most of the better slaughter sheep sold in a range of 320-350c/kg cwt.

The NLRS said the quality of the trade weight and heavy lambs was good. The usual buyers attended, although not all operated fully.

Extra heavy lambs sold to a market top of $174, with most lambs generally selling $2-$8 easier. The better presented light and heavy trade weight lambs sold close to firm on last week’s levels. Restocker and feeder buyers were active, with most lambs returning to the paddock for $82-$115 and first cross ewe lambs making to $128. Light weight 1 and 2 score lambs sold from $81-$86.

Sheep quality was mixed. Some good runs of heavy Merino and crossbred sheep were yarded, but there were more light sheep and most of these sold $2-$10 easier. The heavier sheep generally sold close to firm on last week.

The NLRS said the mixed quality yarding of crossbred and Merino lambs sold to easing competition. All the usual trade and processor buyers attended, but two significant operators failed to bid and feeders had occasional input on shorn crossbreds.

The NLRS said fewer buyers attended and not all were active, as a large number of store conditioned lambs again came forward. Prices fell across all categories. Light weight lambs to the trade ranged mostly from $60-$91, with light weight trade 2 and 3 scores making $85-$94 to be up to $10 cheaper. Restockers were active and paid from $62-$92.

The NLRS said the better quality yarding had some good lines of well-conditioned lamb, with all buyers active.