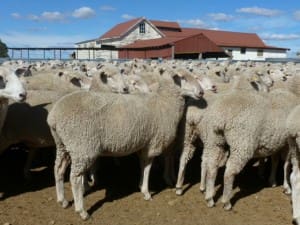 Mutton prices trended firm to slightly dearer, even in yardings where quality declined.

The National Livestock Reporting Service said its national and Eastern States Daily Indicators for mutton were unchanged, but up one cent for the week.

Breeders were the standout article of this week’s sheep sales, she said.

“In particular, a quality offering of Lines Gum Hill blood Merino ewes out of South Australia, scanned in lamb to the White Suffolk.

First cross Border Leicester-Merino ewe lambs sold for $130.50 in northern NSW. Young scanned ewes made from $176 to a top of $214 for three year olds in lamb to Poll Dorset rams.

The prime lamb sale on Thursday offered smaller lines of primarily lighter lambs and met both processor and restocker interest, with Dorper lambs estimated to dress 16.8kg selling for $90.72 or 540c/kg cwt.

The NLRS said lamb quality was again mixed, with well-finished and plainer lambs penned. Most of the yarding was heavy and extra heavy weight lambs, plus a handy offering of Merinos and Dohnes. The usual buyers competed in a fairly steady market.

The mutton was mostly Merinos and quality was very mixed. Prices lifted, with Merino ewes selling from $83-$124 and crossbred ewes from $91-$127.

The NLRS said quality was reasonable across all grades and the heavy lambs were in good condition. Most lambs were trade and heavy weights, with a few stores offered. Not all buyers were present and competition was solid on the trade weights, but softer on the heavy grades, resulting in a generally cheaper market.

The NLRS said the yarding reverted back to a plainer quality and mixed autumn offering. Buyer competition was reduced to a few regular followers and prices were cheaper than a week ago, with secondary domestic lambs the most affected.

One pen of 10 extra heavy lambs topped the sale at $160. Most light weight slaughter lambs sold from $77-$90, with very plain and smaller frame lambs making $28-$66. There was little restocker interest shown, but this was more likely reflective of the smaller pen lots and mixed quality on offer, rather than demand. The lead pens of slaughter lambs were mostly in the 24-26kg carcase weight range and sold from $128-$142. The line-up of heavy export lambs was limited to just a handful of lots which reached up to $160.

The few pens of extra heavy ewes sold from $90-$110, while medium weights made from $72-$88 and very plain lightweight sheep from $50-$68. Processor demand for rams was subdued.