AMERICAN rancher Trent Loos has urged Australian lamb producers to defend and promote their product in the face of animal rights protests, misinformation and urban-rural disconnection.

At the LambEx 2014 conference in Adelaide today the flamboyant Trent told more than 900 sheep producer and industry stakeholders to “not shut up” and to accept the challenge to re-educate consumers about where lamb comes from. 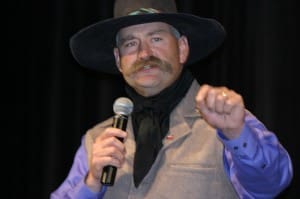 Trent Loos, addressing the standing-room only audience at LambEx in Adelaide today

Mr Loos said people across the world were using internet search engines rather than experts to answer their questions about modern sheep farming, rather than speak to a veterinarian, educational institute or expert.

“They get out their smart phone or their computer and they type in what they want to know in Google.

“And if you’ve not Googled yourself lately – that is ‘sheep production’ – you really don’t know what it is that the consumer is getting in terms of a stream of misinformation,” he said.

“You see, I started doing this in 1999 because I believed the consumer did not know enough about where their food was coming from.

“I’m here to tell you in 2014 the consumer knows too much about where their food comes from,” Mr Loos said.

“The problem is that too much of what they know isn’t so.”

In a wide-ranging presentation, Mr Loos said Australia had the energy resources and food production to alleviate problems around the world.

“Some 21 million children in the world die from zinc, iron and protein deficiencies each year, and you can take care of that right here in Australia and get the food to the people.”

Mr Loos said people he met while travelling told him their priorities were the cost of food, its safety and nutritional value to their family. They never asked about the proper treatment of animals.

“It’s because they assumed that they are (treated properly).”

But he said producers could not afford to be complacent and should take every opportunity for “constructive dialogue” with those who disagree with farming, and to tell the story of sustainable food production.

“Ninety nine percent of Australians are disconnected with farming and that’s your opportunity.”

“The only reason animal rights protesters drive livestock producers nuts is that they do not shut up,” Mr Loos said.

“We need to be more like them and not shut up, because what the true disconnect is about people losing sight of the cycle of life: everything lives, everything dies and death with a purpose gives full meaning to life,’ he said.