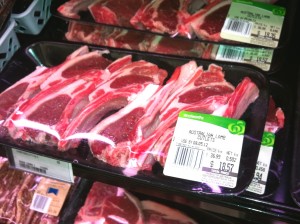 Australian lamb producers’ share of retail returns for the past two months was more than 10 per cent above the ten-year average, Meat and Livestock Australia said this week.

December quarter indicative retail lamb prices declined for the second consecutive quarter, to 1271¢/kg retail weight. Assuming retail prices did not change, the lamb producer share of the retail dollar in February was 61pc and in March it was 58pc, MLA said. This was well above the ten-year average of 48pc.

MLA said Australian lamb prices made strong gains throughout the beginning of 2015 with national trade lambs averaging 543¢/kg cwt in February, before easing to 518¢/kg cwt in March.

MLA said it is important to note that the producer share of the retail dollar should be considered in conjunction with many other indicators – this is especially true in the case of beef, where around 70pc of production leaves the domestic market.

“Furthermore, due to limitations in the frequency of retail price data, the producer share should be considered over a long time horizon, as short-term (month-on-month) changes are mostly reflections of changes in livestock prices.”

MLA said on the back of improved cattle prices in February, particularly for trade cattle, the beef producer share of the retail dollar continued to climb, to 37.4pc – the highest share since the end of 2011.

“However, with follow up rain scarce in March, easing cattle prices resulted in the producer share declining (as of March 26), to 36.6pc.”

MLA said the above producer shares are dependent upon the assumption that retail prices were flat throughout the first quarter of 2015.

“However, even if retail beef prices increased 2% quarter-on-quarter, a historically high jump, the February and March shares are still 36.6% and 35.9%, respectively – well above the ten-year average of 33pc.”