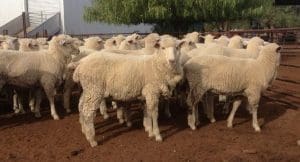 LAMB prices rose again by as much as $20 mid-week, as previous week saleyard rates and rain limited direct-to-works consignments.

Nearly 10 per cent of the Wagga lamb yarding made $200 or better, with agents selling 3540 lambs for $200-plus and at least one sheep processor – Fletcher International Exports – also competing against keen export lamb and domestic buyers.

Several export and domestic processors have released forward contracts for lambs up to August, but some are at rates which are close to, or have been exceeded by, current saleyard prices in the upward moving market.

More lambs in all weight ranges are averaging above 600c/kg cwt, with more drafts in the light export, trade heavy and extra weight categories making 650c/kg-plus. Some light slaughter and trade lambs sold for more than 700c/kg cwt mid-week at Wagga, but more often to restockers.

The ESDI for mutton rose 15 cents to 381c/kg, and the national indicator lifted 16 cents to the same level.

Carcoar lambs up to $12 dearer

In the mostly plain quality yarding of sheep, light weights sold firm and heavier lines were $3-$5 cheaper compared to last to last week. The score 2 ewes sold from $32-$75 and the better score 3 and 4 crossbred and Merino lines made $75-$120.

The NLRS said the damp conditions didn’t deter vendors, with numbers slightly higher. Bidding intensified over trade and export categories with all buyers eager to secure loads. Shorter skinned supplementary-fed lambs attracted the strongest competition. All major export and domestic processors operated fully. Restockers were also competing over all categories at times throughout the sale for well-bred second cross lambs.

The mixed quality sheep included all weights and grades. Demand was markedly stronger due to forthcoming rain. Not all processors could match the higher prices, and stepped into lighter weight sheep. Heavy sheep sold $20-$30 dearer recording a top price of $170.20 to average 455c/kg. There were more heavy Merino wethers and they made $127-$167. Trade sheep were keenly contested with buyer competition pushing prices up by $7-$8 to $72-$127.

The NLRS said the usual buyers competed strongly for the fair to very good quality yarded that had a good supply of trade weight lambs and also plainer unfinished types.

The NLRS said lamb quality was average to good, with heavy and trade weight lambs in reasonable numbers. The usual buyers operated strongly in a dearer market.

The NLRS said prices were up for all categories in the mixed quality sheep and lambs, due to strong demand from buyers.

In Queensland at the Warwick saleyards on Wednesday, the agents yarded 2024 lambs and hoggets, and 749 sheep.

The market was quoted as firm on last week’s rates for a similar-sized yarding and a line of 65kg lwt lambs from Moonie producers T.H. and T.M. Sullivan of ‘Biddybrook’, topped the sale at $170.