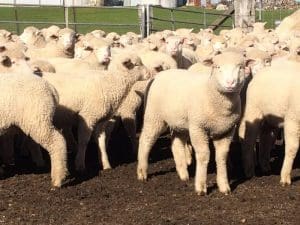 Competition was weaker from fewer buyers, with prices for trade lambs falling $3-$9 at the Cowra and Griffith saleyards on Friday, and heavy lamb rates losing up to $13.

After Friday’s sales, the Eastern States Daily Indicators were all slightly lower, capping off big corrections for the week ranging from 33-57c/kg, though still leaving the trade and heavy lamb indicators above 600c/kg.

The national mutton indicator improved 1 cent to 383c/kg, as did the ESDI for mutton, to finish on 384c/kg, a 12-cent decline for the week.

Sheep and lamb listings increased by 942 head to 29,627 on AuctionsPlus last week.

Older merino ewes averaged $126 and made to $158 for 235 mid-March shorn 5-6 year-old Pemcaw blood ewes at Dubbo, NSW, that weighed 60.1kg lwt, were mostly score 3, and scanned in lamb 167 percent in lamb to Border Leicester rams.

A line of 110 7-8 month-old unmated White Dorper future breeders from Moulamein, NSW, sold for $145. The Murray Downs blood ewes weighed in at 47.4 kg and were mostly score 4.

Top quality lines of Composite ewes made good money this week, with the top price of $231 being paid for 196 10-11 month-old mid-February shorn Chrome composite ewes lambs at Ballyrogan in Victoria. The ewes were scanned 100pc in lamb to White Suffolk rams.

The NLRS said lamb quality was a little mixed. The heavy and new season lambs were well-presented, but there were some plainer lines. Most of the lambs were trade weights, including about 580 new season lambs. A few heavy weights were offered and the number of stores was very limited. Most buyers operated, but competition was generally softer in the cheaper market.