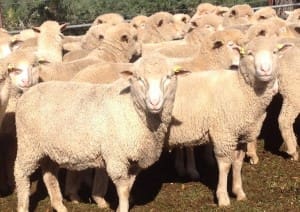 ALL lamb prices lift significantly in saleyards this week as rainfall limited yardings and processors competed keenly amid concerns about future supplies.

The ESDI for mutton lifted 2 cents to 343c/kg and the national indicator fell 4 cents to 339c/kg.

“Numbers eased right off yesterday because we had 30mm-plus of rain in the area and Sunday and Monday.

“I don’t think the lambs are out there,” he said.

In this area and through most of central New South Wales, when the new season lambs were “on the run” from July to October last year, a lot of lambs were sold, with fewer shorn and kept back.

“The usual price drop didn’t happened late in the spring and so a lot of bloke who would normally keep around 50 percent of their lambs, shear them and keep them for 6-8 months, which would be about now, have already got rid of their lambs.

“There are the traders and the lucerne blokes on the rivers around here who buy a few in and have been keeping the numbers reasonable – but it has been difficult to buy a reasonably-priced store lamb in the last six month.”

Lambs are “definitely not here” in the same numbers as previous years, and NSW and Victoria had a “pretty dry pinch” in the last couple of months before the recent rain, he said.

“I’m not saying they are going to be as light as they were here yesterday, but I reckon we will struggle to yard 20,000 lambs for probably the next two months.”

Mr Reid also believed the new season lambs in the Forbes area would reach markets later this year due to the season, possibly about a month later.

Trade lambs sold $15-$20 dearer at Forbes yesterday, he said, with some lines making 600c/kg cwt or more. His agency sold some feedlot lambs yesterday out of the same pen as lambs sold last week.

“They would have been similar carcase weights as the week before.”

Mr Reid said lamb producers were also under pressure to get crops in after the rain.

“It will be a good test to see how many numbers there are out there anyway.”

Elders Bendigo livestock manager Nigel Starick said lamb prices had to improve with the lower numbers. He believed Elders was on track to yard its usual numbers in coming weeks, but total Bendigo yardings would depend on the level of trading over the next few months.

“There is a bit more belief in the season now and there might be a bit of movement in the stock game.

“But lamb numbers are probably a little bit down on what had been anticipated because they have gone earlier.”

Despite the increased yarding, the NLRS said numbers were back on the expected draw following recent rain. The pretty good quality yarding included some good heavy weight lambs and a fair selection of trade weights and Merinos. The market was strong.

The NLRS said the overall quality of the lamb offering was very mixed. There were limited supplies of well-finished trade and heavy weights. Demand for all classes of lamb was very strong from the usual buyers as supply concerns take effect.

All categories experienced strong price gains. Restockers also showed greater confidence. There was more variation in the quality of the lambs suitable to restock. The quality of the heavy and extra heavyweight lambs showed some improvement due to the low numbers, with prices significantly dearer.

Sheep were also in high demand, particularly among well-finished medium and heavy weight drafts. Prices in most categories were also significantly dearer, especially for heavy weights.

Forbes’ trade lambs lift up to $15

The NLRS said after good general falls of rain in the drawing area numbers showed a significant drop. Lamb quality was mixed in the yarding of well-finished and plainer lambs. Most of the usual buyers competed strongly in the dearer market.

The NLRS said numbers dropped significantly after good general falls of rain in the drawing area. Quality was mixed in the lamb yarding of well-finished and plain lamb lines. Most of the usual buyers competed strongly in the dearer market.

The NLRS said wet weather contributed to the smaller yarding of lambs and sheep; a decline of more than 7000 on a week ago. Quality was just average, with only limited pens of well-finished trade and export lambs. All the usual buyers attended, although when the market opened noticeably dearer some did not make purchases.

Lamb prices tracked $6-$9 above last week. The supply of heavy lambs was limited and prices reached at top of $169, lower in dollar per head terms than a week ago. However, there was less weight on offer and carcase prices lifted to 520-550c/kg across the general run of export lambs, which made $150-$168.

Sheep quality was very plain, with most offered in smaller pen lots of mixed grades. The sale was dearer, with the better quality slaughter sheep estimated at 330-360c/kg cwt. Heavy crossbred ewes sold from $90-$108 and the best Merino ewes made $82-$111.

The NLRS said lamb quality was average to good, with the regular buyers operating very keenly in damp conditions. Lambs mostly sold to a dearer trend being of $2-$10 on last week.

The best heavy lambs made to $200, with an estimated carcass weight of 36kg. Domestic orders were very strong this week and purchased heavier lambs to fill orders. The better covered trade weight lambs sold from $130-$158 and at times made over 600c/kg.

The NLRS said the generally good quality crossbred and Merino lambs sold to stronger competition from the usual trade and processor buyers, plus an extra supermarket operator.

The NLRS said only a small field of trade and processor buyers attended and not all were fully active. A small number of restocker orders provided some competition. Good weight and condition was very hard to find, with most lambs in store condition.

Ewe quality was close to equal to last week and prices were mostly firm. Lighter drafts sold from $20-$53 and medium weight processor mutton made $49-$73. Better conditioned and heavy weight ewes sold close to firm on average, with weight the reason for a top of $110 for some extra heavy cross bred ewes. Most heavy Merino ewe drafts sold from $79 and $94, averaging close to 305c/kg. Restockers picked up a small percentage of the ewe hoggets and suitable mature ewes for $30-$74, which was equal to last week.

Wether prices remained firm, with export weight drafts making $85-$95 and wethers with a big skin selling to $100. Wethers sold to restockers and feeders for $60-$93, equal to recent sales. Rams were in demand, with better ram lambs making $80-$105 and suitable for export weight lines selling for $30-$77. Old rams sold to processors for $20-$55.

The NLRS said there was some very good drafts of heavy lambs and a wide range of light and store types.