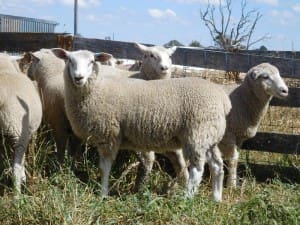 BUYERS paid less for lambs in all categories in saleyards mid-week as yardings increased at all centres.

Most saleyards were reported as yarding fair to average quality lamb yardings as the dry seasonal conditions continued.

Not all the usual buyers operated in all markets and there was limited demand for heavy lambs from export buyers in most centres.

The national indicator and ESDI for mutton finished down 6 cents on 299c/kg on Thursday.

In New South Wales at the Central Tablelands Livestock Exchange at Carcoar on Wednesday, the agents yarded 10,100 lambs, 1700 more than last week, and 6200 sheep, 2000 more.

The NLRS said it was a fair quality yarding, with a good selection of trade and heavy weight lambs and a good number of ideal store lambs. Not all the regular buyers operated in the cheaper market.

The mixed yarding of mutton included some excellent lines of heavy weight sheep and a good percentage of lighter weights. Most grades sold around firm. The 2 score ewes sold from $15-$69. The better 3 and 4 score crossbreds made $60-$106 and Merinos sold to $95. The 3 and 4 score Merino wethers sold from $72-$102.

The NLRS said lamb quality varied. Heavy and extra heavy lambs were in good numbers and while there was a few well-finished trade weight lines, most lacked finish. Light store lamb numbers improved. Not all the usual buyers were active in the cheaper market.

Sheep quality was mixed. There was a reasonable number of heavy sheep, but plenty of plain lines. Prices trended cheaper for the overall plainer quality yarding. Medium weight ewes sold from $51-$84. Heavy Merino ewes made $80-$106 and very heavy crossbreds sold to $120. Most sold from 260-300c/kg cwt.

In Victoria at the Hamilton saleyards on Wednesday, the agents yarded 9717 lambs, 644 more than last week.

The NLRS said lamb quality was plain to average, with fewer good quality lambs offered to buyers from most of the usual processors. There was limited demand for the heavy weight lambs from export buyers.

The yarding provided only a few pens of heavy and medium ideal trade weight lambs. Almost 60 percent of the yarding was lighter plainer types and store condition lambs, an indication of the tough season throughout the western districts this season.

The NLRS said an average quality lamb yarding was offered to the usual buyers. With the quality more mixed, most lambs generally sold to a downward trend to be up to $5 back on last week.

Heavy lambs reached a top of $160 and the best trade weight lambs made to $136.50. Lighter lambs sold close to firm and a little dearer in places as processors and restockers competed keenly. Restockers paid mostly from $96-$116 and-$71 for lighter lots.

At the Hamilton saleyards on Thursday, the agents yarded 6586 sheep, 870 more than last week.

The NLRS said sheep quality was mixed in the Merino-dominated yarding of ewes and medium weight wethers. The offering ranged from good quality drafts down to average, plainer light sheep, with many showing some length in their fleeces. Most of the usual buyers attended, but were more selective than past weeks, in a subdued market overall.

The NLRS said it was mixed quality yarding. Well-presented lines sold to strong competition, with graziers bidding on the store lines.

Light weight lambs sold from $41-$88, depending on condition, and the trade weights made from $85-$115. Lambs suitable for airfreight sold for $67-$91. Light weights and immature new season store crossbred lambs sold to restockers and feeders from $30 up to $100 for the better framed lines. Merino store lambs sold from $15 for light plain lambs up to $78 for better quality lambs.

Restockers paid from $15-$72 for young Merino ewes, depending on quality. Young wethers sold to restockers and feeders from $40 for lightweights up to $94 for the better quality lines. Good lines of quality mutton sold well to finish $2 up on last week.

At the Warwick saleyards on Wednesday, the agents yarded 1474 lambs and hoggets, and 512 sheep.

The market was quoted as firm on last week’s rates for all descriptions in the smaller yarding of sheep and lambs. The top-priced pen of 58.2kg lwt lambs sold for $152 for the Elsley Pastoral Company of ‘Kanara’, Yelarbon.