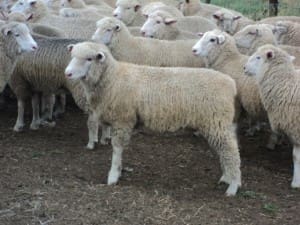 Exporters were again quiet, with some not buying at southern centres, but domestic processors bid strongly for quality at some saleyards, especially Wagga Wagga on Thursday.

Mutton markets also this week missed the competition on heavier sheep from NSW processor Fletcher International due to an industrial dispute.

Following on from the recent fall in saleyard lamb prices and a producer pull-back in lamb and sheep supply, the National Livestock Reporting Service quoted all indicators firm or on the rise again.

The NLRS said it was a much plainer quality yarding of lambs with only a few lines of well-finished trade and heavy weights penned. A large percentage of lightweight crossbreds and Merinos was yarded.

Higher prices for weight and quality at Goulburn

At the Goulburn saleyards on Wednesday, the agents yarded 2200 lambs and 2600 sheep.

The NLRS said it was a better quality yarding. More young lambs were offered and most showed good finish.

A good run of Dorper lambs provided the best options for the usual buying orders. The old lamb section also provided some well-finished trade and heavy lambs and few light and trade Merinos. Demand fluctuated in an overall cheaper market, but the lift in quality and weight produced firm to slightly higher prices. Restockers were quiet in an offering that presented few opportunities.

It was a generally good run of mutton with most categories represented. Demand weakened and prices were $2-$10 cheaper. Light 2 score ewes made $40-$48, while medium and heavy weights ranged from $58-$118. Merino wethers made $82-$97 for the better 2 and 3 scores, while extra heavy crossbred wethers reached $138 for most mutton to average 280c/kg-320c/kg cwt and 300c/kg-340c/kg cwt for the more attractive Merino wethers.

The NLRS said quality was fair across all weights and grades. Trade lambs were in shorter supply, with increased numbers showing dryness in the skin. Heavy and extra lambs were in reasonable supply, and export processor competition was solid on the back of reduced supplies. Plain inferior type lambs lacking finish were keenly sought by processors, which lifted prices considerably. The usual domestic and export buyers competed in a solid market.

Well-finished heavy trade lambs sold to stronger demand, from domestic processors and select butcher orders, which helped lift prices $5. The majority of the heavy trade lambs averaged 539c/kg cwt, reaching a top price of $142.20. Trade lambs, 20-22kg cwt, were in reasonable supply and the better well-finished pens making from $120-$133.20. There was limited numbers of trade Merino lambs and bidding intensified for the well-finished pens resulting in a dearer trend of up to $12. Medium weight Merino trade lambs made from $110-$127. Well-bred secondary lambs returning to the paddock were in limited numbers and sold from $86-$112.

Heavy export lambs were in limited numbers with some processors very selective when making purchases. Heavy lambs made from $134-$151, to average 537c/kg cwt. The bulk of the extra heavy lambs sold from $144-$186, averaging 515c/kg-535c/kg cwt.

Mutton quality was mixed, with all weights and grades represented. Merino ewes/ suitable for the trade were well-supplied and sold $5-$8 higher, to average 354c/kg cwt. Heavy ewes sold to strong demand with several buyers eager to capture adequate supplies. Heavy sheep sold $2 dearer, making from $87-$119. Merino wethers were in limited numbers and processors paid from $76-$113. Younger ewes purchased by local restockers made from $88-$106.

No export lamb inquiry at Hamilton

In Victoria, at the Hamilton saleyards on Wednesday, the agents yarded 9585 lambs, 2761 fewer than last week.

The NLRS said it was plainer quality yarding, although there were some good lines of trade weight lambs and well-bred lighter lambs. Only a few pens of heavy lambs were offered. There was almost no export inquiry as most buyers were present but not all operated fully. However, domestic buyers displayed strong demand for 20-22kg cwt trade lambs.

Southern Grampians Livestock and RE principal at Hamilton, Ashley Crow, said at the moment there was an over-supply of lambs and there were still good lambs coming into markets.

“So the market, the abattoirs, can dictate the terms a bit, but it is going to turn.

“On the other hand, I’ve never seen store lambs so dear, everything is favourable.”

Mr Crow said instead of producers getting 600c/kg cwt for lambs, they were getting 520-530c/kg cwt.

“It has come back a little bit earlier than what I would have thought.

“I would have thought that it would have come back in March-April when the stubble lambs come off, it is just numbers.”

Mr Crow said the general rain three weeks ago had helped the industry.

“We’re finding that people are going into their second wave of lambs at the moment and lambs sold in the past two to three weeks got the lift in prices.

“Now there are lambs out there that will sit for the next four to five weeks to go on into March,” he said.

“We haven’t really missed out on much at the moment — we’re finding a lot of the light, plainer lambs are being sold at the moment because they just aren’t going to do and it is too long to get out of them.

Though mutton prices had dropped and up to $10-$15 on heavier sheep, he expected prices to improve because of numbers available.

Mr Crow said there would definitely be a shortage of stock – lambs, sheep and beef — in the winter months.

He said the beef and lamb restocking markets were very similar at the moment.

“Your export cattle and export sheep have come back and your light sheep and light store cattle have got dearer.

“So it’s going to be interesting to see in the winter months, where the profits are going to be.”

The NLRS said lamb quality was very mixed, with limited numbers of well-finished trade weight and heavy lambs yarded. Most of the regular buyers operated in a generally cheaper market.

The quality trade weight lambs sold firm and most others were $2-$8 easier compared to last week. Restockers paid from $76-$106 for their better lambs and $26-$66 for lighter lots. They also paid to $94 for Merino lambs.

In the Hamilton saleyards on Thursday, the agents yarded 8505 sheep, 7248 fewer than last week.

The NLRS said sheep quality and weights were very mixed. They sold to the usual buyers plus some restockers active on younger sheep.

The offering had some good lines of Merino wethers in wool that sold firm to up to $3 dearer. Heavier ewes and crossbred wethers were $6-$8 cheaper, medium mutton remained firm and the lighter weight sheep sold $4-$5 dearer. Light 1 and 2 score sheep sold from $45-$83 at an estimated average of 365c/kg cwt.

The NLRS said fewer trade and processor buyers were present, allowing restockers to purchase a larger share of the yarding as more lightweight lambs came forward. Prices generally were easier across the market.

The NLRS said continuing hot dry conditions lifted numbers by close to 40 percent, with a large number of light weight store lambs, including Merinos. Quality was very mixed, with some very good prime lambs penned. Most lambs however, were secondary and light store drafts.

Ewe prices were impacted by quality, with reduced interest in the very light drafts that sold $12 cheaper. Some very good heavy weight ewes were penned and there were solid supplies of very light ewes. Buyers were present but not all were active on ewes early in the sale.