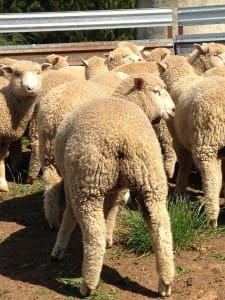 Buyers were forced to pay from $5-$12 more for trade weight lambs early this week, as more processors competed for smaller offerings and producers opted to shear and run lambs on.

Restockers were also active in most saleyards, though mainly on Merino lambs and lighter crossbred lines.

The ESDI for mutton closed 7 cents higher to 298c/kg and the national indicator was 8 cents higher on 299c/kg.

The National Livestock Reporting Service said over-the-hook lamb indicators in NSW continued to fall this week. However some contributors suggest they have begun to level out, as trade weight lines range from 440c to 480c/kg cwt. Light weight sheep continue to be the hardest hit, with rates averaging 243c/kg cwt.

In Victoria, the NLRS said OTH lamb indicators continued to move lower week-on-week, with trade weight categories down an average of 23c/kg cwt. Mutton indicators were unchanged on week-ago levels.

The NLRS said it was a fair quality yarding with a large percentage of the crossbred lambs in dry condition and carrying burrs. Merino lambs and hoggets were also well-supplied.

Sheep quality was mixed with a good selection of well-finished lines and fair numbers of plainer types. The market was solid with most grades finishing firm to $5 dearer. The 2 score ewes sold from $31-$68, while better 3 and 4 score Merinos made $65-$123 and crossbreds sold to $96. The better finished Merino wethers sold from $75-$115.

The NLRS said lamb numbers dropped considerably after the previous cheaper market. It was a better quality yarding, with only a small selection of older lambs. Restockers were active on the Merino lambs.

It was mostly a good quality yarding of mutton, with processors operating on most of the offering. Ewes and wethers in prime condition sold $10-$20 dearer, with crossbred ewes making $73-$96 and Merino wethers selling to $90. Wethers sold to processors for $90.

Market trends were generally dearer, with trade weight young lambs up by $5-$7 and heavier weights by $4. Trade and heavy weight old lamb prices improved by $2-$3.

The limited number of sheep on offer sold to a slightly cheaper trend, with the low numbers creating transport ramifications for some buyers.

The NLRS said there were 10,810 mixed quality new season lambs, including a good offering of finished lines and some plainer drier types. Most of the usual buyers competing in a dearer market.

The NLRS said a much smaller offering of lambs came forward amid reports recent price falls and grass-seed issues had prompted local farmers to shear young lambs. The reduced offering was mixed in quality and not all the buyers operated. Prices trended dearer than a fortnight ago, but this was based on limited quotes.

The yarding of old season lambs comprised mainly smaller clean-up lots of a few head and prices reached a top of $120.

The sheep were mostly Merino ewes. Prices were up to $18 dearer than a fortnight ago, with pens of heavy Merino ewes in big skins selling from $90-$102. The better quality mutton ranged from about 245-300c/kg, to average around 265c/kg.

Demand was stronger, with most young lambs to slaughter ranging from $6-$10 dearer, the best presented domestic lambs recorded much greater price gains. The market reached a top of $136 for heavy export lambs and $133 for domestic lambs. About 20 pens of heavy lambs sold from $130-$136. Most of the young lambs sold to domestic slaughter made $110-$125. On a carcass basis the heaviest lambs were around 440-460c/k cwt and most of the better trade lambs ranged from 470-485c/kg with select sales out to about 510c/kg cwt. Bidding was selective on plainer bred and finished trade lambs that lacked cover, which resulted in cheaper prices for some score 2 categories.

The stronger competition from processors for kill lambs meant the specialist restocking orders from Ballarat for bigger store lambs did not operate this week. Most lambs sold back to the paddock were lighter types at $75-$95, a few dollars dearer than the last sale. Store orders came from Deniliquin, Finley, Albury, Birchip, Horsham and the local Bendigo area.

Less sheep also came forward and prices were dearer than a week ago. Extra heavy crossbred ewes, which had been discounted at recent sales, were up to $16 dearer at $62-$78.60. The better quality runs of trade mutton sold $3-$7 higher at an estimated 270-300c/kg cwt.

The NLRS said lamb quality was average to good, with most of the regular buyers operating in a dearer market.

On quality, lambs were $5-$10 dearer than last week, with the heavy lambs reaching a market top of $145. As the young lamb selling season gets in to full swing, lambs are now showing more finish and maturity. Quality domestic lambs were keenly sought and sold to $135.

The NLRS said the reduced yarding of crossbred and Merino lambs sold to stronger competition from the usual buyers. The quality of the lambs offered was generally poor with a very large percentage of longer wool, unfinished crossbreds that attracted strong feeder and restocker interest. The few quality lambs attracted strong trade and processor interest.

The NLRS said more trade and processor buyers, and restockers, competed in the sale. Quality was mixed, with some excellent heavy lambs and large lines of store types starting to show signs of the dry conditions. Prices lifted across the market.

Lambs generally sold firm to $4 dearer. Light store lambs to restockers made $15-$55 to be firm. Light lambs sold to processors and feeders were mostly dearer by close to $5 at $60-$87. Trade weight lambs sold from $81-$105 to be $3 dearer, with a reasonable number going to feeders. Heavy lambs were limited and sold to a top of $126. More shorn trade lambs were offered and sold well at $86-$95.

Wether prices firm and ram rates eased. Wether demand from export feeders remained solid with heavy bare shorn drafts making $85-$95. Lighter drafts sold from $62-$95, depending on weight and skin value. Heavy wethers with a good skin sold to a top of $113. Rams lacked demand with ram lambs making $77 and those suitable for export feeders $25-$70. Old rams sold to processors for $5-$25.