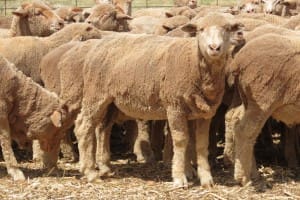 The ESDI for mutton lifted one cent for the day and 19 cents during the week to close on 303c/kg, and the national indicator closed up 1 cent to 300c/kg.

Young Merino ewes sold to $147.50 and November shorn Merino wethers made $117.50 in NSW on AuctionsPlus last week, as the wool market spiked.

The online market listed 68,785 sheep and lamb numbers this week, just under 30,000 fewer than last week. Southern states buyers were active after patchy and scattered showers across eastern NSW and Victoria.

A small offering of unjoined first cross ewe hoggets attracted buyer interest, with an average price of $154.25 and a range of $130-$170. The top price was paid for 17-18 month-old June shorn ewes weighing 63.7kg and mostly score 4 from Currawarna, NSW.

The NLRS said 7650 mixed quality new season lambs were penned, including some well-presented lambs. However, more lambs showed the effects of the warmer weather. The usual buyers competed in a fairly steady market.

Most of the sheep were Merino ewes. Quality was mixed and prices remained similar. Merino ewes sold from $75-$93. Crossbred ewes averaged $77. Merino wethers made $73-$99.

Cowra’s trade and store lambs up $5

The NLRS said lamb quality improved, with the new season lines in top condition. Most of the yarding was trade new season lambs and extra heavy weights. There were more store lambs suitable for restockers and a limited number of old lambs. All the usual buyers operated and competition was good, resulting in a continued dearer trend.

The NLRS said a good field of trade and export processors, and several restockers, bid on the similar-sized offering of sheep and lambs. There were 7100 new season lambs and 250 old lambs in the average to good quality offering. A moderate selection of heavy and trade weight lambs was available, with store lambs in good supply.