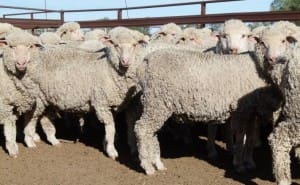 Trade lamb prices rose by $5-$11 and heavy lambs sold firm to $7 dearer than at the same time last week.

The national trade lamb indicator closed the week on 520c/kg, up 2 cents, and the heavy indice finished on 515c/kg, up 1 cent.

The ESDI for mutton lifted 3 cents to 318c/kg, equalling the firm national indicator.

The NLRS said lamb quality was mixed, with some handy runs of well-finished and grain-assisted pens offered along with the plainer drier types. Heavy and extra heavy weight lambs were well-supplied. The usual buyers competed in a dearer market.

The NLRS said lamb quality improved with most of the trade and heavy lambs generally showing better finish. Mainly heavy were weights penned, along with a handy run of trade lambs. Store lambs were limited in supply. Competition from the usual buyers was quite a bit stronger resulting in a dearer market.

AuctionsPlus market operations officer Harriet Forster said sheep and lamb prices and numbers were tested last week by the ongoing dry spell, with many hoping and looking for the rain forecasted over the weekend to provide some much needed relief.

Online sheep and lamb listings decreased 9727 to 41,330. Merinos continued to be well-represented with high restocker demand matching the supply. Strong interstate demand led to Merino ewes being trucked 1770 kilometres from Tara in Queensland to Cavendish in Victoria, she said.

Ms Forster said a flock dispersal near Keith in South Australia produced some outstanding prices, with the maiden ewes taking out the top price of the week of $218.50. The 140 early April shorn 21-22 month-old Lines blood ewes weighed 62.9kg lwt and were mostly score 3 and 4. They were scanned 100 percent in lamb to Border Leicester rams.

Within a larger offering of proven breeders averaging $141, 245 33-35 month-old Lines blood ewes at Keith sold for the top price of $201. The early April shorn ewes weighed 72.6kg and were mostly score 3 and 4, and 100pc scanned in lamb to Border Leicester rams. Ms Forster said competition on these ewes was strong, with six bidders fighting for the line.

Merino wether lambs ranged from $49-$79 to average $60, with 710 unshorn August-September drop Centre Plus blood lambs at Dirranbandi in Queensland making the top price.

A line of 180 two-year-old mid-October shorn Primeline composite ewes made the top price for crossbred ewes this week of $214. The maternal composite ewes at Kingston, SA weighed 69.5kg lwt, were mostly score 3, and were scanned 100pc in lamb to Suffolk and White Suffolk rams.