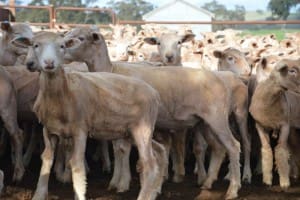 Trade and heavy lambs are more consistently making over 570c/kg, with heavy and extra heavy lambs at several markets making more than $200.

The best domestic lambs at Ballarat on Tuesday averaged close to 600c/kg cwt, with some light trade lines making more than 650c/kg.

After Tuesday’s saleyard sales, the National Livestock Reporting Service quoted all national and Eastern States Daily Indicators for lamb and mutton, except restocker lambs, as higher.

In New South Wales, the NLRS said over-the-hook lamb and mutton indicators lifted this week after saleyard prices over previous weeks showed improvements. A ‘no quote’ is given for heavy weight mutton as a regular contributor is currently not quoting that category.

In Tasmania, the NLRS quoted over-the-hook rates for light lambs as lifting 20c/kg, but all other categories unchanged to slightly dearer. Sheep rates lifted 5-10c/kg for 18-24kg+ cwt lines.

The NLRS said the fair quality lamb yarding included some top heavy weights and a reasonable selection of trade weights.

Most grades were represented in the good quality sheep yarding. The strong market continued, with most grades lifting a further $5-$7. The score 2 ewes sold from $35-$84. The better score 3 and 4 woolly Merinos made $73-$141 and crossbreds sold to $128. Woolly Merino wethers sold to $135.

The NLRS said the mixed quality lamb yarding contained a good run of trade and heavy weight lambs that were grain assisted or off Lucerne that sold into a stronger market. All the usual buyers attended, but some could not compete with the prices paid.

Light weight slaughter lambs sold dearer to restockers, while the better store lambs were slightly cheaper. There was a little, but quality-related, price change for well-finished trade weight lambs. Increased demand lifted prices for heavy and extra heavy weight by $5-$6. A drop in weight in the extra heavy weight class accounted for the fall in the average price.

The quality of the sheep was fair to good, with a number of pens carrying close to full-wool skins. Market trends were generally dearer with well-finished sheep getting hard to find. Once again a drop in weight accounted for any lower prices.

The NLRS said lamb quality was fair with good, with lines of well-finished and grain-assisted lambs offered and some plainer types. Heavy and extra heavy weight lambs were again well-supplied. The usual buyers competed in a dearer market.

The NLRS said lamb quality was good, with several supplementary-fed lines, although a few more lots were showing some dryness.

The market varied, with trade lambs $4 cheaper and heavy lambs firm. More light lambs were offered, with most going to restockers at firm to cheaper prices.

The sheep were a mixed line up of ewes and wethers. Several runs of heaver sheep in full wool were dearer, but lighter mutton struggled to hold firm.

The NLRS said lamb quality was plainer than a week ago, with less weight and finish available. Bidding intensified on the better presented trade and export lambs which displayed decent fat cover, leading to much higher carcase rates than recent weeks.

The market was generally $4-$10 dearer, although some categories recorded greater price gains, including quality supplementary-fed Merino lambs in high value skins. The sale also gained strength as it progressed. Lamb prices reached $208 for a pen of heavy exports estimated at around 34kg cwt. There was only one sale over $200, but demand for heavy lambs improved and there were about a dozen sales from $180-$198.

The strongest competition was for lambs suiting domestic kill orders. The lead pens of heavy trade weights sold from $140-$160, and medium and light trade lambs made $120-$138. Demand for light weight kill lambs was very strong at $90-$117 for most. On a carcase basis, most crossbred lambs returned averages of 570c-600c/kg, with trade weight types higher at times, particularly late in the auction. Not many lambs suited restockers and the best sale of $115 was for a line of young first-cross ewe lambs.

The yarding featured a high percentage of Merino lambs, and the best of these off grain sold to $150. Merino lambs recorded some of the best price gains of the sale.

The sheep were very ordinary, comprising mostly smaller pen lots of mixed ewes. The market was dearer, with the main lines of mutton averaging 360-390c/kg cwt. Heavy crossbred ewes sold from $100-$120 and a small pen of Dohne ewes made $135.

The NLRS said lamb quality was again very good, with some excellent quality heavy and extra heavy lambs with an estimated carcase weight of 40kg selling to $221. The usual buyers operated very strongly on all classes of lamb, with the market generally $10 dearer and more in places.

The better-covered domestic lambs sold to strong competition at $135-$162 and averaged close to 600c/kg. Select lots of lighter trade weight lambs through the sale made close to 670c/kg.

The mixed quality yarding of crossbred and Merino lambs sold to stronger competition from the usual trade and processor buyers plus some extra limited domestic input. Feeders and restockers were subdued and concentrated mainly on light weight crossbreds and longer wool Merinos.

The NLRS said a larger field of trade and processor buyers attended, with a small number of restocker orders. Quality lifted, with more lambs with good weight and condition.

The NLRS said the recent heavy rains throughout the south of the state had an effect on the market. Numbers almost halved and values lifted generally $3-$5. Quality improved on prime stock and drove competition.

Graziers paid from $62-$74 for young Merino ewe lambs and young Merino wether lambs to feed for $63-$93. Ram lambs were also keenly sought by graziers, with lighter weights making $50-$75 and the trade paying from $75-$113 for better types.

In the northern Tasmanian saleyards at Powranna and Killafaddy on Tuesday, the agents yarded 1200 lambs, 200 more than last week, and 400 sheep, 260 fewer.