SLAUGHTER lamb prices pushed closer to an indicator level of 800 cents a kilogram this week, months earlier than last year, as saleyard trade and heavy line prices generally rose by $5-$25 a head.

Store and light lamb prices in Victoria rose by up to $40 a head as southern restocker orders and light lamb exporters securing supplies reacted to recent rain, with many lines making over 1000c/kg.

The lift of around 40 cents a kilogram in trade and heavy lamb saleyard carcase weight prices in the last week has been attributed to pre-Australia Day demand for quality, combined with a general rain and seasonally affected shortage of suitable lines.

Agents and the National Livestock Reporting Service are reporting fewer quality trade and export lambs in New South Wales, while recent rain in eastern states has also limited supply in some areas, with lot-feeders and graziers holding on with the expectation of over-the-hook spot prices of 800c/kg-plus.

In New South Wales at the Dubbo saleyards on Monday, lamb and sheep number were down considerably after 10-80mm of rain fell in preceding days.

The National Livestock Reporting Service said the fair quality yarding had a few pens of neat trade lambs and some outstanding heavy weights. But a large percentage of the yarding was young lambs lacking finish.

Stronger demand for light and trade lambs at Bendigo

In Victoria at the Bendigo saleyards on Monday, the agents yarded 9000 lambs, 1000 fewer than last week.

The NLRS said it was smaller yarding of lambs and sheep despite no sale next Monday due to the Australia Day public holiday. Lamb quality was very mixed, with some very good shorn lambs off feed alongside plainer types lacking finish and fat cover due to the season.

There was little carcase price change on the extra heavy lambs over 30kg. Dearer results were evident for the pick of the domestic 22-24kg lambs, and for small MK processing lambs weighing from 12-16kg.

Competition intensified for the neatest medium weight trades in short skins which pushed toward 800c/kg at $178-$196. There were still a lot of plainer lambs weighing 18-21kg and lacking finish, which sold from $140-$160. Demand for ideally weighted MK processing lambs was stronger, with these small lambs making from $105-$125 to average close to 800c/kg.

Ballarat lamb prices lift by up to $20

In Victoria at the Ballarat saleyards on Tuesday, the agents 17,309 lambs, 12,386 fewer than last week. The NLRS said lamb quality was plain to very good, with more shorn lambs offered this week than unshorn. All the usual buyers operated in a strong market, with extra competition from interstate processors lifting prices to 900c/kg in places. Overall, the market was up $7-$20 and more in places.

In New South Wales, at the Forbes saleyards on Tuesday, the agents yarded 17,200 lambs, 100 fewer than last week. The NLRS said lamb numbers remained similar after patchy rain in the drawing area. Lamb quality continues to be mixed, with a handy penning of finished lambs offered with the plainer types.

In NSW, at the South Eastern Livestock Exchange at Yass on Wednesday, the agents yarded 8000 lambs, 5000 fewer than last week.

The NLRS said lamb quality was fair to good. Light unshorn store lambs were well-supplied, and the major fall was in the trade and heavy weight categories. The market sold to a dearer trend.

In Victoria, at the Hamilton saleyards on Wednesday, the agents yarded 15,786 lambs, 11,053 fewer than last week. The NLRS said close to half the offering was presented shorn. The quality was good; however, there were very few heavy and extra heavy lambs.

All the major possessors and buyers attended, but not all operated or operated fully. There was a strong contingent of store buyers and feeders from Horsham, Nhill, Geelong, south-east South Australia and local areas, who operated in a market that was $25-$40 dearer. Processors showed a preference for quality finished shorn lambs and restockers paid to $177.

In NSW, at the Wagga Wagga saleyards on Thursday, the agents yarded 26,000 lambs, 4000 fewer than last week. The NLRS said lamb quality was either plain or outstanding, with lighter lambs dry in the skin. The best presented lambs were grain-fed in the trade and heavy lamb classes. Generally, prices for all trade types strengthened significantly due to the shortage of quality lambs in NSW.

Heavy young lambs over 26kg were in limited supply. Lighter weight young lambs were supported by restockers and feedlots. Price results for trade lambs strengthened, due to a contraction of supply. The best of the heavy trade lambs, 22-24kg, sold up to $22 dearer to average 809c/kg. Light weight lambs sold to processors held there value best, with woolly types making $132-$148. New season light weight lambs sold back to the paddock at stronger rates, from $92-$148. Young shorn lambs with weight and frame were keenly sought by local agents and feedlots for $132-$168.

Bidding for the heavy and extra heavy lambs ignited among export and domestic processors. Extra heavy lambs sold to buoyant competition, with buyers all pushed to capture a market share, lifting prices $20-$26, to average 777c/kg.

Lamb supply set to be a big issue

Owner of the Langlands Hanlon agency selling at the Forbes and Carcoar saleyards, Geoff Rice, said lamb supply is going to be a huge issue due to “the numbers that aren’t coming through form the joinings last year, let alone what we have sold off early.”

“Whether or not they throw money at the market to get the lamb or what they do … it will be interesting to see whether we get that $10/kg or not.”

Mr Rice said lamb restockers and lot feeders who bought at high rates late last year are hoping for a decent break of autumn rain and the market gets a kick to lift the spot price over 800c/kg.

“I know a lot of the guys were doing their figures on that 800c/kg mark.

“I think a lot of our supplementary feedlot guys don’t have their own lambs to put through the system and when the store lamb job kicked through October-November they held off (buying) due to the season,” he said.

He said the lack of lambs might augur well for a lift in the market and he believes there is still some “upside” to come.

“I just don’t think there will be that $10 or better that people are talking about – throwing money at them doesn’t make them appear.”

Recent rainfall has been patchy around Forbes and not general and many supplementary feeders were still bring grain and hay from interstate. He said fodder and grain supplies will the next factor to affect supplies of supplementary-fed lambs, currently the only source of finished lamb in NSW.

He attributed the recent rise in lamb prices to the supply of better quality lambs to meet normal late January-pre-Australia Day demand, plus rain-driven demand for lighter lambs.

“The numbers aren’t there and Victoria got more rain than we did.”

He said it will be interesting to see if the predictions for less rain through February and tighter fodder supplies pushed more lambs onto the market.

“If you are getting pressure from your mutton, that puts pressure on the hoggets; it filters through and the longer that mutton job stays good, the more indication there is that we will get a more severe kick in the lamb job.”

Nutrien Ag commercial livestock manager Mark Barton said with the recent increase in store lamb prices, and the cost and less availability of fodder and grain, projected finished lamb returns were on a “knife-edge” at current market rates.

Meat & Livestock Australia said the national trade lamb indicator increased 34 cents in the first two weeks of 2020. It is expected that tighter supply will support finished lamb prices, and restocker and trade lamb competition will intensify with more rain.

The national trade lamb indicator opened 2020 close to where it finished in 2019, reported at 705c/kg carcase weight on Wednesday 8 January, 7 percent above year-ago levels.

MLA said so far in 2020, lamb prices have been buoyed by renewed optimism from producers following widespread rainfall across the eastern states. For the two weeks over the Christmas break, lamb slaughter eased over 30pc in the eastern states, with processors now fully active and looking to secure. However, competition is expected to hold in coming weeks, with national lamb yardings for the first two weeks of January easing 5pc on year-ago levels. 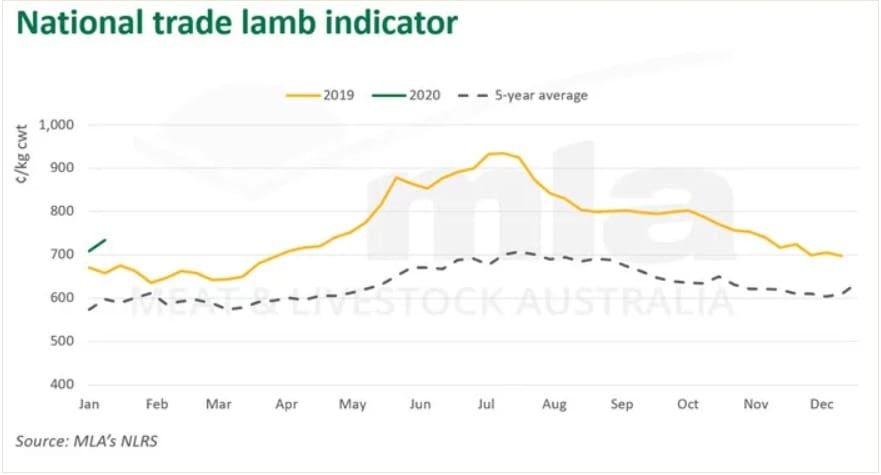 MLA said historically, the NTLI remains stable in the early weeks of the new year; however, the forecast for limited supply availability, combined with strong international demand has resulted in the indicator trading at elevated levels to those seen historically throughout the January period. Since the turn of the year, the NTLI has climbed 4pc or 34 cents to be reported at 739c/kg cwt on Tuesday 21 January.

The flow on effects from the drought saw below average marking rates across the country in 2019, which is expected to result in a similar, if not more pronounced decline in supply this year, MLA said. MLA expected that a return to ‘average’ seasonal conditions within the next 12 months would lead to demand for younger lambs dominating the store market as producers look to rebuild their flocks.

With fewer lambs on the ground, the prospect of more ewe lambs being retained for breeding and strong demand fundamentals, lamb and mutton prices can be expected to remain at historically high levels (potentially records), in 2020, MLA said.