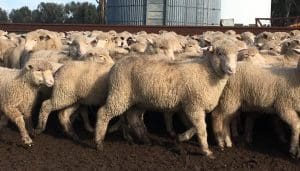 At the Wagga saleyards on Thursday, MLA’s National Livestock Reporting Service said major domestic processors were the strongest on trade and heavy lambs with finish and shorter skins, lifting prices by up to $10 dearer. Most of the new season trade lambs at Wagga also sold $10 higher at $124-$166, averaging 667c/kg.

After Thursday’s saleyard sales, the National Livestock Reporting Service quoted the Eastern States Daily Indicator for restocker lambs as increasing 66 cents to 611c/kg and the ESDIs for trade and heavy lambs regained much of the recent losses.

The NLRS said lamb quality was plain, as wet and cold weather continued. Most were light secondary lambs and there was only a small run of well-finished trade weights. Heavy lambs were in short supply and there was a few pens of new season lambs. Most of the usual buyers were active in a cheaper market, mostly due to quality.

Sheep quality was plain. Prices were similar to the previous sale, with medium weights selling from $74-$102 and heavy crossbred ewes made to $128. Better covered sheep averaged 380-420c/kg.

At the Central Tablelands Livestock Exchange at Carcoar on Wednesday, the agents yarded 3600 lambs, 2900 fewer than last week, and 1200 sheep, 300 less.

The NLRS said it was a fair quality yarding, with some lambs showing the effects of the winter. There were a few pens of good trade lambs and a very limited number of heavy weights. Light weight lambs sold $4 cheaper to processors, with the 12-18kg 2 scores making $56-$108. Trade lambs were $3-$4 dearer, with the 3 scores selling from $100-$159, or mostly 625-645c/kg. A single pen of well-presented trade weight new season lambs sold for $160. The limited selection of heavy weight lambs sold up to $10 dearer, with the over 22kg 4 scores making $159-$181. A single pen of trade weight Merino lambs sold for $104 and hoggets sold to $110.

The NLRS said the quality of the trade and heavy lamb lambs was quite good, but the light weight lambs were in plainer condition.

More new season lambs were offered — including more than 2000 in one consignment — which sold strongly to restockers. Farmers are now in the process of locking up grazing crops, which is contributing to the increasing numbers of new season lambs at the market.

Heavy lambs sold to stronger export competition from more buyers. Prices were generally $8-$15 dearer, averaging 640c/kg. There was a reasonable number of extra heavy lambs that sold from $174-$224.

The NLRS said lamb quality was average to plain and not all the usual buyers operated fully. The recent fall in skin values also had an effect on lowering some of the lamb and mutton prices.

The NLRS said the yarding included 400 new season young lambs. Quality was average as smaller lots of old lambs were sold off. Most of the regular buyers attended and operated in a dearer market.

The Ouyen Livestock Exchange offered 10,663 lambs and 2395 sheep on Thursday and will commence weekly sales after the regular sale on Thursday August 25.

In Queensland at the Warwick saleyards on Wednesday, the agents yarded 986 lambs and hoggets, and 136 sheep.

The lamb market was firm to dearer and sheep sold fully firm in the smaller yarding.

The top price of $191 was paid for 65kg lwt lambs from Allan O’Donnell of Warwick.